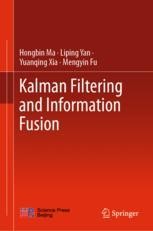 This book addresses a key technology for digital information processing: Kalman filtering, which is generally considered to be one of the greatest discoveries of the 20th century. It introduces readers to issues concerning various uncertainties in a single plant, and to corresponding solutions based on adaptive estimation. Further, it discusses in detail the issues that arise when Kalman filtering technology is applied in multi-sensor systems and/or multi-agent systems, especially when various sensors are used in systems like intelligent robots, autonomous cars, smart homes, smart buildings, etc., requiring multi-sensor information fusion techniques. Furthermore, when multiple agents (subsystems) interact with one another, it produces coupling uncertainties, a challenging issue that is addressed here with the aid of novel decentralized adaptive filtering techniques.Overall, the book’s goal is to provide readers with a comprehensive investigation into the challenging problem of making Kalman filtering work well in the presence of various uncertainties and/or for multiple sensors/components. State-of-art techniques are introduced, together with a wealth of novel findings. As such, it can be a good reference book for researchers whose work involves filtering and applications; yet it can also serve as a postgraduate textbook for students in mathematics, engineering, automation, and related fields.To read this book, only a basic grasp of linear algebra and probability theory is needed, though experience with least squares, navigation, robotics, etc. would definitely be a plus.

Dr Hongbin Ma is currently a Professor at the School of Automation, Beijing Institute of Technology. He received his bachelor degree from Zhengzhou University in 2001 and doctoral degree from the Academy of Mathematics and Systems Science, Chinese Academy of Sciences in 2006. He joined Bell Labs Research Center at Beijing in March of 2006 and later joined Temasek Laboratories, National University of Singapore in August 2006 as a Research Scientist. His research focuses on adaptation, learning and recognition, especially adaptive estimation and control, as well as their applications in robots, smart cars, and UAVs. He is also a member of IEEE, SIAM, CSIAM, ACM and Automation Society of China. He serves as (leading) guest editor or member of international/technical program committee of several academic conferences/journals such as Chinese Control Conference, Chinese Conference on Decision and Control, International Conference on Control & Automation, Journal of Robotics. Dr. Ma is the principle investigator of several scientific projects supported by National Natural Science Foundation (NSFC), Ministry of Education, and so on. In 2009, he was supported by the programme of New Century Excellent Talents in University, by Ministry of Education. In 2012, he obtained the 13th Huo Ying Dong Young Teacher Award for Higher Education and the 13th Excellent Education & Teaching Award of Beijing Institute of Technology. He was also supported by Beijing Outstanding Talents Project starting from 2012. In 2017, he obtained Wu Wenjun Artificial Intelligence Science and Technology Award, Big Data Academic Innovation Award, Outstanding Scientific Outcome Award and Second Prize in Innovation Contest for Oversea Talents. He received several awards, such as 2016 ICIRA Recognition Award, in international conferences. Dr. Ma has published more than 100 academic papers in reputable journals or conferences. And under his supervision, a dozen of students have performed well in scientific research, innovation contests, and establishing themselves.

Dr Liping Yan is currently an Associate Professor at the School of Automation, Beijing Institute of Technology. She received her bachelor degree and master degree from Henan University in 2000 and 2003, respectively. And she received her doctoral degree from Tsinghua University in 2007. She joined Institute of Communication since 2007 and then joined Beijing Institute of Technology since 2009. Her research focuses on multi-sensor information fusion, image registration, and integrated navigation and intelligent navigation. She has published two textbooks and more than 30 academic papers in reputable journals or conferences. And she obtained some original results in asynchronous information fusion. She has won several prized in scientific research and financially supported by several funding projects such as National Natural Science Foundation.

Dr. Yuanqing Xia was born in Anhui Province, China, in 1971 and graduated from the Department of Mathematics, Chuzhou University, Chuzhou, China, in 1991. Professor at theSchool of Automation, Beijing Institution of Technology. He received his M.S. degree in Fundamental Mathematics from Anhui University, China, in 1998 and his Ph.D. degree in Control Theory and Control Engineering from Beijing University of Aeronautics and Astronautics, Beijing, China, in 2001. From 1991 to 1995, he was with Tongcheng MiddleSchool, Anhui, China, where he worked as a teacher. During January 2002 to November 2003, he was a postdoctoral research associate in the Institute of Systems Science, Academy of Mathematics and System Sciences, Chinese Academy of Sciences, Beijing, China, where he worked on navigation, guidance and control. From November 2003 to February 2004, he was with the National University of Singapore as a research fellow, where he worked on variable structure control. From February 2004 to February 2006, he was with the University of Glamorgan, Pontypridd, U.K., as a Research Fellow, where he worked on networked control systems. From February 2007 to June 2008, he was a Guest Professor with Innsbruck Medical University, Innsbruck, Austria, where he worked on biomedical signal processing. Since July 2004, he has been with the Department of Automatic Control, Beijing Institute of Technology, Beijing, first as an Associate Professor, then, since 2008, as a Professor. And in 2012, he was appointed as Xu Teli distinguished professor in Beijing Institute of Technology and obtained National Science Foundation for Distinguished Young Scholars of China. His current research interests are in the fields of cloud control, networked control systems, robust control, active disturbance rejection control and flight control. He has published six monographs in Springer and John Wiley, and more than 100 papers in journals. He is a deputy editor of Journal of Beijing Institute of Technology, associate editor of Acta Automatica Sinica, Control Theory and Applications, International Journal of Innovative Computing, Information and Control. He obtainedSecond Award of Beijing Municipal Science and Technology (No. 1) in 2010, Second National Award for Science and Technology (No. 2) in 2011, and second natural science award of The Ministry of Education (No. 1) in 2012.
Dr. Meng-yin Fu received the B.S. degree in radio electronics from Liaoning University, Shenyang, China, in 1987, the M.S. degree in control theory from Beijing Institute ofTechnology, Beijing, China, in 1992, and the Ph.D. degree in geodetic engineering from Institute of Geodesy and Geophysics, Chinese Academy of Sciences, Wuhan, China, inFrom August 1987 to September 1989, he was an Assistant Engineer at the Weather Bureau of Inner Mongolia. Since March 1992, he has been working for Beijing Institute of Technology as a Professor. He has coauthored three books and published more than 50 papers in technical journals and conferences. His current research interests include inertial navigation and intelligent navigation, navigation, guidance and control. Prof. Fu was an Executive Director of the Chinese Society of Inertial Technology and a Fellow of the Beijing Association for Science and Technology. He was supported by Professor Cheung Kong Scholars Program, and he is the leader of a program for Changjiang Scholars and innovation team, the leader of an innovation team of national defense science and technology industry. His research focuses on integrated navigation, intelligent navigation, image processing, learning and recognition as well as their applications.