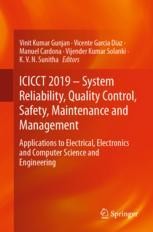 Applications to Electrical, Electronics and Computer Science and Engineering

This book discusses reliability applications for power systems, renewable energy and smart grids and highlights trends in reliable communication, fault-tolerant systems, VLSI system design and embedded systems. Further, it includes chapters on software reliability and other computer engineering and software management-related disciplines, and also examines areas such as big data analytics and ubiquitous computing. Outlining novel, innovative concepts in applied areas of reliability in electrical, electronics and computer engineering disciplines, it is a valuable resource for researchers and practitioners of reliability theory in circuit-based engineering domains.

Vinit Kumar Gunjan is an Associate Professor at the Department of Computer Science & Engineering at CMR Institute of Technology Hyderabad (Affiliated to Jawaharlal Nehru Technological University, Hyderabad). He is an active researcher, and has published research papers in IEEE, Elsevier & Springer Conferences, authored several books and edited volumes of Springer series, most of which are indexed in SCOPUS database. He received the prestigious Early Career Research Award in 2016 from Science Engineering Research Board, Department of Science & Technology Government of India.

He is an active Volunteer in the IEEE Hyderabad section and has volunteered in the capacity of Treasurer, Secretary & Chairman of IEEE Young Professionals Affinity Group & IEEE Computer Society. He was involved as an organizer for numerous technical & non-technical workshops, seminars & conferences of IEEE & Springer. During the tenure he had the honour of working with top IEEE leaders and received the Best IEEE Young Professional award in 2017 from the IEEE Hyderabad Section.

Vicente García Díaz is an Associate Professor at the Computer Science Department of the University of Oviedo. He has a PhD in Computer Engineering from the University of Oviedo. His research interests include model-driven engineering, domain-specific languages, technology for learning and entertainment, project risk management, software development processes and practices. He graduated in Prevention of Occupational Risks and is a Certified Associate in Project Management through the Project Management Institute.

Manuel Cardona received his BS degree in Electrical Engineering from Universidad de Sonsonate (USO), El Salvador, in 2004 and his MSc degree in Automation and Robotics from Universidad Politécnica de Madrid, Madrid, Spain, in 2008.

He is currently a PhD candidate in Automation and Robotics at Universidad Politécnica de Madrid. He is a senior member of IEEE member.

Dr. K.V.N. Sunitha completed her BTech ECE at Nagarjuna University, MTech Computer Science from REC Warangal. She is awarded a PhD from JNTU, Hyderabad in 2006. She has 25 years of teaching experience. She has been working as Founder Principal, BVRIT Hyderabad College of Engineering for Women, Nizampet, Hyderabad since August 2012. She received an “Academic Excellence Award” from the G. Narayanamma Institute of Technology & Science in 2005; “Best computer Science engineering Teacher award for the year 2007” from the Indian Society for Technical Education ISTE; “Best Faculty” award in Academic Brilliance Awards2013 from the Indian Education Expo; “Distinguished Scientist Award in NLP from Venus International in 2016, “Distinguished Principal Award” from the CSI Mumbai in 2017 from the IIT Bombay. She has been recognized by the AICTE as an NBA Expert Evaluator.  Her areas of research include natural language processing, speech processing, and network & web security. She is a reviewer for several national and international journals. She is a fellow of the Institute of Engineers; Sr. member of IEEE & the international association CSIT; and life member of various technical associations like CSI and ACM.