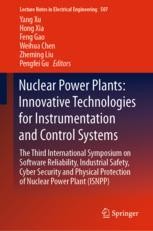 This book is a compilation of selected papers from the 3rd International Symposium on Software Reliability, Industrial Safety, Cyber Security and Physical Protection of Nuclear Power Plants, held in Harbin, China on 15th–17th August 2018. The symposium discussed the status quo, technical advances and development direction of digital instrument control technology, software reliability, information security and physical protection in the process of nuclear power development. Offering technical insights and know from leading experts, this book is a valuable resource for both practitioners and academics working in the field of nuclear instrumentation, control systems and other safety-critical systems, as well as nuclear power plant managers, public officials, and regulatory authorities.

1. Prof. Yang Xu is currently an Associate Professor and a Ph.D. Advisor at the Department of Engineering Physics, Tsinghua University, Beijing, China. He received his Bachelor’s, Master’s and Ph.D. degrees from the Department of Engineering Physics, Tsinghua University in 1998, 2000 and 2003, respectively. Dr. Xu worked for the Institute of Nuclear and New Energy Technology (INET) of Tsinghua University from 2003 to 2014 before returning to the Department of Engineering. Since December 2010, he served as an Associate Professor and a National Registered Consulting Engineer. His research focuses on the nuclear fuel cycle and instrument control direction. He has directed, participated in and completed several projects in this area, such as “Study on Common Cause Failure of Digital Instrument”, “Standards and Literature’s Research of Digital Control Room Modernization Program”, “Seismic Stability Design, Identification and Verification for Large LCD screen for Nuclear Power Plant”, and “Expert System for Numerical Operation of Nuclear Power Plant”. His research work has won the National Defense Science and Technology third-grade prize.

2. Prof. Hong Xia received her Ph.D. degree from the College of Power and Energy Engineering, Harbin Engineering University (HEU), Harbin, China, in 2000. She is currently the Dean of the College of Nuclear Science and Technology, HEU, and the Director of Heilongjiang Nuclear Society. Prof. Xia’s research interests include nuclear power plant safety and reliability, condition monitoring and fault diagnosis, operation simulation, system modeling methodology and signal processing. She has been awarded the national defense pre-research, national natural science fund, state key laboratory fund and many other research projects. She has received several national research awards, including the second prize of the National Science and Technology Progress Awards and the Provincial Science and Technology Progress Award six times. Additionally, she has published more than 100 papers and 4 textbooks as well as other academic works.

3. Feng Gao is the Executive Director of China Nuclear Power Design Co., Ltd (Shenzhen), and he has been with the company for the past 13 years. Mr. Gao received his M.E. degree in Industrial Engineering from Huazhong University of Science and Technology, Wuhan, China. Feng Gao’s research areas include the electrical technology, software testing and digital instrument and control systems of nuclear power plants. He has taken part in the design, installation and checking of TXP and TXS platforms. He has won the China Instrument and Control Society’s first prize in Science and Technology, and the first prize in the Nuclear Industry’s Excellent Engineering Design Award, as well as the Ministry of Nuclear Industry’s Outstanding Engineering Consulting Award in the Power Industry.

4. Weihua Chen is the Director of the Instrument and Control Department at China Nuclear Power Design Co., Ltd (Shenzhen). He received his B.E. degree in Automation Instrument from Beijing University of Science and Technology, China in 1995 and became a senior engineer in 2005. Weihua Chen’s areas of research interest include the techniques for analyzing the safety and reliability, as well as the overall design technique of digital instrument and control system for nuclear power plants. Currently, he is engaged in the design of safety instrument and control system for HPR. He has received the Nuclear Industry’s Excellent Engineering Design Award, the China Nuclear Energy Industry Association’s Science and Technology Award, and the Science and Technology of China Instrument and Control Society first prize.

5. Mr. Liu Zheming studied Enterprise Financial Accounting at Jilin College of Finance & Taxation and Computer Software and Applications in Jilin University in 1996 and 2013, respectively. Working as a Special Assistant to the Secretariat of China Instrument and Control Society and Secretary General of the Product Information Committee of the China Instrument and Control Society since 2013, Mr. Liu has organized over 200 forums, conferences, training, and exhibitions in the instrumentation and nuclear engineering field. Collaborating with various professionals and experts, Mr. Liu has contributed to publications such as the Manual of Petrochemical Engineering Measurement and Control, Processing Industries Automatic Measurement and Application, Manual of Petrochemical Machinery, and New Techniques and Applications of Petrochemical Engineering.

6. Dr. Pengfei Gu received his Ph.D. degree from the Institute of Nuclear and New Energy Technology, Tsinghua University, Beijing, China. Currently, he is working at China Nuclear Power Design Co., Ltd (Shenzhen). In recent years, he worked on software verification and validation of safety instrument and control system for nuclear power plants. Dr. Gu’s research mainly focuses on software verification and validation, including software aging management, software reliability analysis and the safety and security of software. He received the China Excellent Patent Award, and the China Instrument and Control Society first prize in Science and Technology.