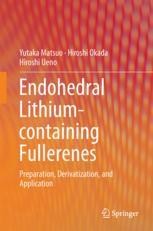 This book describes the emergent endohedral metallofullerene, lithium-containing fullerene Li@C60, with an overview from its history to recent application research. The book covers synthesis, preparation, purification, structure, physical and chemical properties, derivatization, computational theoretical studies, and device application of Li@C60. Readers can learn cutting-edge nanotechnology of this exotic nanocarbon material, which is expected to deliver future solutions in clean energy and bio devices. This work is by a researcher who has long experience in carbon nanomaterials—more than 15 years with his contributing coworkers. The level of the book is appropriate for graduate students, post-docs researchers, and young faculty members who are interested in nanomaterials from the point of view of chemistry and physics.

Dr. Yutaka Matsuo was born in Osaka, Japan, in 1974. He received bachelor’s (1996) and PhD degrees (2001) from Osaka University under the guidance of Professors Kazuhide Tani and Kazushi Mashima. Then, he joined Department of Chemistry, School of Science, The University of Tokyo (Prof. Eiichi Nakamura’s group) as an Assistant Professor. In 2004, he moved to the Nakamura Functional Carbon Cluster Project, ERATO, Japan Science and Technology Agency (JST) as a Leader of the functional complex group. In 2009, he was promoted to Project Professor to conduct his own group in Department of Chemistry, School of Science, The University of Tokyo. In 2016, he joined University of Science and Technology of China (USTC) as a Professor of Hefei National Laboratory for Physical Sciences at the Microscale and Department of Chemistry, School of Chemistry and Materials Science. He also became a Project Professor, Department of Mechanical Engineering, School of Engineering, The University of Tokyo (2016-present), Visiting Professor, Faculty of Pure and Applied Sciences, University of Tsukuba (2012-present), and Visiting Professor, Institute for Chemical Research, Kyoto University (2016-present). His research topics are development of organic solar cells with basic studies on materials science for functionalization of fullerenes and carbon nanomaterials. He was awarded The Chemical Society of Japan Award for Young Chemists for 2005, The Young Scientists’ Prize, The Commendation for Science and Technology by the Minister of Education, Culture, Sports, Science and Technology, Japan (2010), Nozoe Memorial Award for Young Organic Chemists (2012), 1000 Talent Plan for Foreign Experts, China (2016) and so on.