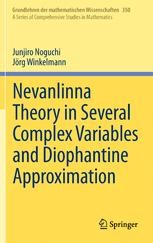 The aim of this book is to provide a comprehensive account of higher dimensional Nevanlinna theory and its relations with Diophantine approximation theory for graduate students and interested researchers.

Chapter 2 presents the First Main Theorem for coherent ideal sheaves in a very general form. With the preparation of plurisubharmonic functions, how the theory to be generalized in a higher dimension is described. In Chap. 3 the Second Main Theorem for differentiably non-degenerate meromorphic maps by Griffiths and others is proved as a prototype of higher dimensional Nevanlinna theory.

Establishing such a Second Main Theorem for entire curves in general complex algebraic varieties is a wide-open problem. In Chap. 4, the Cartan-Nochka Second Main Theorem in the linear projective case and the Logarithmic Bloch-Ochiai Theorem in the case of general algebraic varieties are proved. Then the theory of entire curves in semi-abelian varieties, including the Second Main Theorem of Noguchi-Winkelmann-Yamanoi, is dealt with in full details in Chap. 6. For that purpose Chap. 5 is devoted to the notion of semi-abelian varieties. The result leads to a number of applications. With these results, the Kobayashi hyperbolicity problems are discussed in Chap. 7.

In the last two chapters Diophantine approximation theory is dealt with from the viewpoint of higher dimensional Nevanlinna theory, and the Lang-Vojta conjecture is confirmed in some cases. In Chap. 8 the theory over function fields is discussed. Finally, in Chap. 9, the theorems of Roth, Schmidt, Faltings, and Vojta over number fields are presented and formulated in view of Nevanlinna theory with results motivated by those in Chaps. 4, 6, and 7.

“This intriguing monograph describes the state of the art of large parts of Nevanlinna theory in several complex variables. … an important reference for graduate students and researchers in Nevanlinna theory for many years.” (CH. Baxa, Monatshefte für Mathematik, Vol. 184, 2017)

“I consider this book as extremely helpful both for research and teaching in this area, since it does not only give a self-contained access to some of the deep original research results of the two authors, but it also always discusses the limits and the side aspects of these results by relevant examples, respectively counter-examples, and puts them into its historic contexts, which allows a much deeper understanding than if one just would see the main results.” (Gerd Dethloff, zbMATH 1337.32004, 2016)

“The book under review gives a panoramic survey of Nevanlinna’s theory of valued distribution and Diophantine approximation in several complex variables. … The book is addressed to researchers and graduate students, and an interested reader will be rewarded with a clear exposition of classical and recent progress in this active area of mathematics.” (Felipe Zaldivar, MAA Reviews, April, 2014)