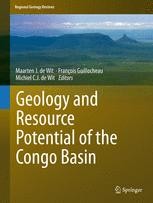 Geology and Resource Potential of the Congo Basin

This book summarizes the geomorphology, geology, geochronology, geophysics and mineral resources of the Congo Basin, one of the world’s most enigmatic and poorly understood major intra-continental sedimentary basins, and its flanking areas of Central Africa. It provides an up to date analysis of the large region’s origin and evolution. The book’s nineteen chapters take the reader through the entire basement history, as well as the Basin’s ca. 700 million years of cover sequences. Starting from its Archean cratons and Proterozoic mobile belts, and proceeding through the Phanerozoic sequences, including the most recent Cenozoic successions, the book also explores the present drainage systems and the subtle but complex topography of the Congo Basin. It also presents and evaluates new basin models and related dynamic processes, as well as revised correlation schemes with its Gondwana counterparts in South America, all of which provide key insights into its rich diamond deposits and other mineral wealth, which are documented in the final chapters.

A specific feature of this book is its synthesis, performed by teams of active experts, of a vast amount of geoscientific data previously only recorded in research reports, company reports, survey bulletins, and scattered journal articles and books.

“In this monograph, 42 authors attempt to synthesize the work to date … and thereby stimulate new research. … This book is likely to become the single most valuable reference for geoscientists seeking an overarching entrée in English into the geology of the Congo Basin. Summing Up: Highly recommended. Graduate students, researchers/faculty, and professionals/practitioners.” (B. M. Simonson, Choice, Vol. 53 (3), November, 2015)