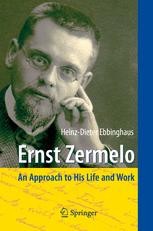 An Approach to His Life and Work

Ernst Zermelo (1871-1953) is best-known for the statement of the axiom of choice and his axiomatization of set theory. However, he also worked in applied mathematics and mathematical physics. His dissertation, for example, promoted the calculus of variations, and he created the pivotal method in the theory of rating systems.

This biography attempts to shed light on all facets of Zermelo's life and achievements. Personal and scientific aspects are kept separate as far as coherence allows, in order to enable the reader to follow the one or the other of these threads. The description of his personality owes much to conversations with his late wife Gertrud. The presentation of his work explores motivations, aims, acceptance, and influence. Selected proofs and information gleaned from unpublished notes and letters add to the analysis.

All facts presented are documented by appropriate sources. The biography contains more than 40 photos and facsimiles, most of them provided by Gertrud Zermelo and published here for the first time.

"The author succeeds beautifully in bridging the pernicious gap between serious and precise mathematical exposition, on the one hand, and general, non-expert, readership, on the other. … is a beautifully produced book, replete with a large number of photographs and a few reproductions of Zermelo’s handwritten communications. Ernst Zermelo was an important mathematician, a gunfighter as well as an architect, about whom any contemporary mathematician should learn a good deal more than what is presented in university courses on set theory and logic. Ebbinghaus’s book is perfect for this purpose." (Michael Berg, MathDL, July, 2007)

"The book under review, by a prominent logician at the University of Freiburg, is a splendid in-depth biography of a complex man … . Ebbinghaus has done a magnificent job in fleshing out Zermelo’s life and work He has included in his book much correspondence and an appendix that contains selected original German versions. A curriculum vitae, many photos, and full bibliographical references are also provided." (Philip I. Davis, SIAM News, Vol. 41 (1), January/February, 2008)

"Ernst Zermelo was part of the coterie of bright young mathematicians that surrounded Hilbert at Göttingen. … This is a highly readable and satisfying work that avoids the dry recitation of facts that sometimes plague biographies about mathematicians. … The author has striven to present as complete a portrait as we are likely to get of this complicated man. The mathematical detail presented is informative … . The biography proceeds chronologically and in manageable chunks. The volume contains many photographs from Gertrud Zermelo’s collection." (J. M. Plotkin, Mathematical Reviews, Issue 2007 m)

"Ernst Zermelo (1871-1953) is a figure ripe for biography, and Heinz-Dieter Ebbinghaus has given an absorbing and well-documented account of Zermelo’s life and work that provides a coherent portrait of a complex, difficult, and somewhat tragic personality. … Ebbinghaus does a good job of … providing just the right amount of detail to make clear the nature of Zermelo’s accomplishments and to whet readers’ interests in learning more about them, without intimidating nonspecialists. … The English style is very good … ." (John W. Dawson, SIAM Review, Vol. 50 (1), 2008)

"This book gives the first English, detailed scientific biography of Ernst Zermelo … . The presentation of Zermelo’s works explores his motivations, aims, acceptance and influence on the development of mathematics. … The book contains more than 40 photos and facsimiles, a large list of references and an index. It gives new light to all facets of Zermelo’s life and mathematical achievements and it can be recommended to a wide audience. The book is suitable for mathematicians, historians of mathematics and science, students and teachers." (European Mathematical Society Newsletter, June, 2008)

"Ernst Zermelo was the most influential set-theorist of the first half of the 20th century. … There is an extensive list of references and a helpful chronological vita. The book is well edited … . It is highly recommended for university libraries and for those interested in the history of mathematics of the 20th century." (Henry E. Heatherly, The Mathematical Intelligencer, Vol. 31 (1), 2009)

“Ebbinghaus’ book includes a large number of short excerpts from unpublished sources in their original language, a substantial number of photographs, a curriculum vitae for Zermelo, a comprehensive bibliography, and a useful index. It is a very welcome addition to our knowledge of mathematics in the twentieth century and a great read for anyone interested in the development of set theory and the life of one of its main protagonists.” (Henrik Kragh Sørensen, Zentralblatt MATH, Vol. 1176, 2010)

“This is an outstanding book in all respects: well written and well organized, carefully researched with numerous photos and a genuine pleasure to read. It gives an accurate and detailed description of all of Zermelo’s contributions to mathematics, not just to set theory. … this book is not just a ‘must have’ for specialists in set theory and its history. It is also recommended for logicians and historians of mathematics in general. Professors may confidently recommend its acquisition by their college or university library.” (Richard E. Hodel, The Review of Modern Logic, Vol. 11 (1&2), June 2007-December 2008)