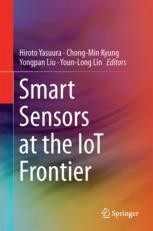 Smart Sensors at the IoT Frontier

This book describes technology used for effective sensing of our physical world and intelligent processing techniques for sensed information, which are essential to the success of Internet of Things (IoT). The authors provide a multidisciplinary view of sensor technology from materials, process, circuits, to big data domains and they showcase smart sensor systems in real applications including smart home, transportation, medical, environmental, agricultural, etc. Unlike earlier books on sensors, this book provides a “global” view on smart sensors covering abstraction levels from device, circuit, systems, and algorithms.

Hiroto Yasuura is the Director of the System LSI Research Center and Professor in the Graduate School of Information Science, at Kyushu University, in Fukuoka, Japan.

Chong-Min Kyung received B.S. in EE from Seoul National University in 1975, M.S. and Ph.D. in EE from KAIST in 1977 and 1981, respectively. From 1981 to 1983, he worked at Bell Telephone Laboratories, Murray Hill. Since he joined KAIST in 1983, he has been working on CAD algorithms, 3-D graphics, and System-on-a-Chip design and verification methodology, development of various RISC/CISC microprocessors, VLIW and reconfigurable DSP cores. His current research includes system-level low-power design, electrical/thermal co-design in 3D IC, architectures of H.264 video CODEC and energy-rate-distortion-power optimization. He served as General Chair in the Korean Semiconductor Conference 2002, ISOCC 2004, A-SSCC 2007, and ASP_DAC 2008. He is founding Director of the IDEC(Integrated Circuit Design Education Center), and currently leads Center for Integrated Smart Sensors, funded as Global Frontier Project by Korean Government. He received the Most Excellent Design Award, and Special Feature Award in the University Design Contest in the ASP-DAC 1997 and 1998, respectively. He received the Best Paper Awards in the 36th DAC held in New Orleans, LA, the 10th ICSPAT, Orlando, FL, in September 1999, and the 1999 ICCD Austin, TX. In 2000, he received National Medal from Korean government for his contribution to research and education in IC design. He is a member of National Academy of Engineering Korea, and Korean Academy of Science and Technology. He is IEEE fellow and Hynix Chair Professor at KAIST.