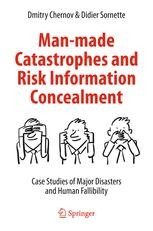 In the book, the term ‘concealment’ is used to represent the two distinct behaviors uncovered in the investigations: (i) facts and information about an organization and its functioning being hidden from those that need them – here the concealment can be due to various factors, such as complexity and miscommunication, to name but two – and (ii) the conscious and deliberate action of keeping important information secret or misrepresenting it. This second meaning makes up a surprisingly important part of the evidence presented.

Accordingly, emphasis has been put on this second aspect and the approach is more pragmatic than academic, remaining focused on evidence-based practical and useful factors. It raises awareness and provides valuable lessons for decision- makers, risk specialists and responsible citizens alike. This work is also intended as a fact-based reference work for future academic and scholarly investigations on the roots of the problem, in particular regarding any psychological or sociological modeling of human fallibility.

Dmitry Chernov is a researcher in the Chair of Entrepreneurial Risks at ETH Zurich. He has more than 15 years of experience as a corporate communication consultant in the former Soviet Union Republics, focusing on improving investor and government relations, as well as crisis communication within the following industries: oil and gas, chemical, electric power, metals and mining, telecommunication, transport, etc. He specializes on researching solutions for efficient risk information transmission that enables timely decision-making before and during industrial disasters.

Didier Sornette is Professor on the Chair of Entrepreneurial Risks at the ETH Zurich, Director of the Financial Crisis Observatory, Co-founder of the ETH Risk Center and member of the Swiss Finance Institute.  He has received many prizes and honors, among them the 2000 Research McDonnell award and the Risques-Les Echos prize 2002. He is a Fellow of the World Innovation Foundation (2004) and, since 2013, of the American Association for the Advancement of Science. Prof. Sornette has edited and authored a number books, many of them published by Springer and is a member of the Editorial and Advisory Board of the Springer Complexity publishing program.