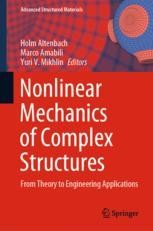 From Theory to Engineering Applications

This book covers different topics of nonlinear mechanics in complex structures, such as the appearance of new nonlinear phenomena and the behavior of finite-dimensional and distributed nonlinear systems, including numerous systems directly connected with important technological problems.

Prof. Holm Altenbach is Member of the International Association of Applied Mathematics and Mechanics and the International Research Center on Mathematics and Mechanics of Complex Systems (M&MoCS), Italy. He graduated from Leningrad Polytechnic Institute in 1985 (Diploma in Dynamics and Strength of Machines). He defended Ph.D. in 1983 and was awarded Doctor of Technical Sciences in 1987, both at the same Institute. His present position includes Full Professor in Engineering Mechanics at the Otto-von-Guericke-University, Faculty of Mechanical Engineering, Institute of Mechanics (since 2011) and Acting Director of the Institute of Mechanics since 2015.

His areas of scientific interest include General theory of elastic and inelastic plates and shells, Creep and damage mechanics, Strength theories and Nano- and micromechanics.

Prof. Marco Amabili obtained his Ph.D. in Mechanical Engineering from the University of Bologna. He is known for his extensive research on nonlinear vibrations and dynamic stability of shell and plate structures, a subject to which he has given many innovative contributions. Professor Amabili serves as Contributing Editor for International Journal of Non-linear Mechanics, Associate Editor and Member of the Editorial Board of several journals. He is Secretary of the Executive Committee of the Applied Mechanics Division of the ASME and Chair of the ASME Technical Committee Dynamics and Control of Systems and Structures. Professor Amabili is working in the area of vibrations, nonlinear dynamics and stability of thin-walled structures, reduced-order models, fluid–structure interaction and vascular biomechanics, including the viscoelastic mechanics of the human aorta, some complex problems in engineering applications, etc. His research is multi-disciplinary, and it has been utilized in the design and analysis of aeronautical and aerospace structures, laminated and FGM shell structures, etc.

Prof. Yuri V. Mikhlin completed Doctor of Science in Physics and Mathematics from Moscow Institute for Problems in Mechanics (Russian Academy of Science), 1988, and Ph.D. in Physics and Mathematics from Dnepropetrovsk State University, 1974. Currently, he is Professor at the Department of Applied Mathematics, National Technical University “Kharkiv Polytechnic Institute,” Ukraine. He has about 50 years of experience in nonlinear dynamics and applied mathematics. His priority scientific results on nonlinear normal modes, stability of motion, dynamics of elastic structures, problems of vibro-absorption, rotor dynamics, chaotic behavior of nonlinear systems, etc., are published in leading international journals. He is Member in the Editorial Board of the journals such as Nonlinear Dynamics, International Journal of Nonlinear Mechanics and Journal of Mechanical Engineering Science.