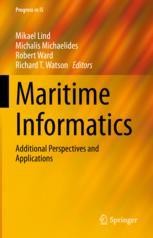 Shipping is the world’s oldest sharing economy and is conducted in a self-organizing manner. Shipping is capital, energy, and information intensive, and with the growing impact of digitalization and climate change, there is a need to rethink the management and operations of this critical global industry - assisted in no small way by maritime informatics.
Building upon the recently published inaugural book Maritime Informatics by Springer, this book will address some of the most recent practical developments and experiences, particularly from a global perspective. The focus of the book is to address contemporary movements to tackle global concerns and to complement Maritime Informatics.

Mikael Lind is the world's first professor in Maritime Informatics and, with a very wide network of associates both in academia and industry, he is a recognized thought leader in his subject. He is the co-founder of the Port Collaborative Decision Making (PortCDM) concept and serves as an expert for the World Economic Forum, Europe’s Digital Transport Logistic Forum (DTLF), and UN/CEFACT.

Michalis P. Michaelides is an Assistant Professor at the Department of Electrical Engineering, Computer Engineering and Informatics at the Cyprus University of Technology. Michalis has been involved as a principal investigator in many research projects, both local (CUT, RPF) and European (EU, FP7) including the Sea Traffic Management Validation project (2016-2019).
Robert Ward was the Secretary-General of the IHO until his retirement in late 2017. Prior to that he was the Deputy Hydrographer of Australia. For more than 20 years he represented Australia and subsequently the International Hydrographic Organization at the highest international levels and played an influential role in the development and implementation of global digital data exchange standards for nautical charting services.
Richard T. Watson has written books on Data Management; Electronic Commerce, Internet Strategy, Energy Informatics; and Capital, Systems, and Objects. He was involved in the Sea Traffic Management Validation project (2016-2019) and provided input to PortCDM. He worked extensively for more than a decade with CIOs to support their strategic needs.
すべて見る