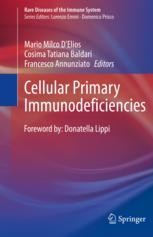 This volume of the series Rare Diseases of the Immune System presents detailed state of the art knowledge on the cellular primary immunodeficiencies; it includes extensive coverage of both basic science discoveries and the latest clinical advances in the field. The book is structured in accordance with the most recent classification of PIDs and also covers updates on the T cell immunological synapse. Readers will find comprehensive, in-depth descriptions of novel cellular PID genes and related clinical applications, mucosal T cells, and the various clinical phenotypes of cellular PIDs. Cellular Primary Immunodeficiencies  will be of high value for immunologists, pediatricians, rheumatologists, oncologists, internists, and infectious disease specialists and will also be informative for MD, Master and PhD students.

Cosima T Baldari graduated in Biological Sciences from the University of Rome (1976). After a postdoctoral fellowship at the European Molecular Biology Laboratory (EMBL) in Heidelberg, Germany, she joined the University of Rome in 1981 as staff scientist, returning to EMBL as visiting scientist in 1983. In 1986 she moved to the University of Siena, where she set up her research group, starting as Associate Professor before being elected Full Professor in 2000. Prof. Baldari is Chair of the Department of Life Sciences, member of the Academic Senate and of  the European Molecular Biology Organization (EMBO),  the AcademiaNet. She also sits in the Scientific Advisory Board of Pompeu Fabra University (Barcelona, Spain). Her fields of expertise include immunodeficiency and immunological synapses.

Francesco Annunziato Full professor of General Pathology at the University of Florence. Gained his degree in Biological Sciences (1994, Florence University), and PhD in Clinical Immunology (honors, 1999, Bari University). Former EiC of the European Journal of Immunology (journal of European Federation of Immunological Societies EFIS) 2016-2019, then EiC of Immunology Letters (other official EFIS journal).  Past President Human Health Science School (Florence University 2016-2020), Head of the Clinical Sciences PhD program in Clinical Sciences (Florence University 2015-2018). Director of the Regenerative Therapy Unit at the University Hospital Careggi in Florence (AOUC) from 2010 to 2016. Since 2016 Director of the FlowCytometry diagnostic Corelab at the University Hospital Careggi in Florence (AOUC) and appointed 2020 Director of the Department of Clinical and Experimental Medicine, and  member of the Academic Senate of the University of Florence. His research work focuses on three main topics, which are: Human Th cell subsets characterization, Human T regulatory cells (Treg) characterization, Characterization of the immunomodulatory activity of human mesenchymal stem cells.