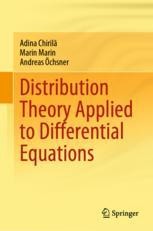 This book presents important contributions to modern theories concerning the distribution theory applied to convex analysis (convex functions, functions of lower semicontinuity, the subdifferential of a convex function). The authors prove several basic results in distribution theory and present ordinary differential equations and partial differential equations by providing generalized solutions. In addition, the book deals with Sobolev spaces, which presents aspects related to variation problems, such as the Stokes system, the elasticity system and the plate equation. The authors also include approximate formulations of variation problems, such as the Galerkin method or the finite element method.

The book is accessible to all scientists, and it is especially useful for those who use mathematics to solve engineering and physics problems. The authors have avoided concepts and results contained in other books in order to keep the book comprehensive. Furthermore, they do not present concrete simplified models and pay maximal attention to scientific rigor.

Adina Chirila is Assistant Professor at the Department of Mathematics and Computer Science at Transilvania University of Brasov. She obtained her Bachelor’s degree and her Ph.D. in Mathematics from the same university. As an international experience, she spent two years in Germany at the Rheinische Friedrich-Wilhelms University of Bonn, from where she graduated with a Master’s degree. She was also a visiting doctoral researcher at the University of Padua in Italy. Her scientific interests lie in differential equations, partial differential equations, equations of evolution and scientific computing with applications in mechanics.