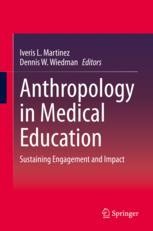 The volume overall emphasizes the important role of anthropology in educating physicians throughout the world to improve patient care and population health.
すべて見る
著者について

Iveris L. Martinez, PhD is Professor, Archstone Foundation Endowed Chair in Gerontology, and Director of the Center for Successful Aging at California State University, Long Beach. She was a founding faculty member of the Herbert Wertheim College of Medicine (HWCOM) at Florida International University where she served as chief of the Division of Medicine & Society and chaired the admissions committee for the college for five years. Between 2007 and 2018, she developed and delivered course content on health disparities, cultural competence, and social determinants of health at HWCOM, as well as led an annual interprofessional clinical workshop across the health sciences. An applied anthropologist, she has received funding from the National Institutes of Health, the Macarthur Foundation, and others for her community-based research on social and cultural factors influencing health, with an emphasis in aging, Latinos, and minority populations. Her current research interests include improving services for caregivers of persons with Alzheimer’s, reducing social isolation in aging, as well as interprofessional efforts to create age-friendly communities. She previously served as the Chair of the Board of the Alliance for Aging, Inc., the local area agency on aging for Miami-Dade and Monroe Counties, and President of the Association for Anthropology, Gerontology, and the Life Course. She received a joint PhD in Anthropology and Population & Family Health Sciences (Public Health) from Johns Hopkins University.

Dennis Wiedman, PhD, is Professor of Anthropology, Department of Global and Sociocultural Studies. Florida International University. Miami, Florida. He received his PhD in Anthropology from the University of Oklahoma in 1979 where he trained in medical anthropology at the University of Oklahoma College of Medicine. Employment in the Department of Psychiatry at the University of Miami School of Medicine in the Office of Transcultural Education and Research grounded him in clinical anthropology as Director of a Department of Psychiatry community mental health unit. His research interests include Native American health, organizational culture, applying anthropology, and directing culture change. He specializes in social and cultural factors for the global pandemic of Type II diabetes and metabolic syndrome. He teaches medical anthropology, anthropological theory, and ethnohistorical research methods. He is the Founding Director of the FIU Global Indigenous Forum with the mission to bring the Indigenous voice to FIU, South Florida, and the world.   During more than a decade in the FIU Provost Office he was the University Accreditation Officer and first Director of Program Review. As lead strategic planner for the university’s first major strategic plan he had a key role in planning and envisioning the new FIU Medical school incorporating medical anthropology principles and a community focus.  He served on the Executive Board of the American Anthropological Association (AAA) in the practicing/professional seat, and was President of the National Association for the Practice of Anthropology (NAPA). Throughout these academic, applied, and practicing leadership experiences, he consistently published on organizational culture theory and analysis in leading journals and book chapters.