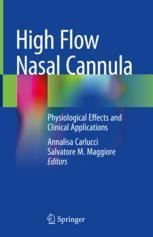 This book presents the state of the art in high-flow nasal cannula (HFNC), an oxygen therapy technique that has recently proven to be a very promising approach to supporting respiratory function in several medical fields.

In the opening part of the book, readers will learn the differences between high-flow and low-flow techniques and gain an overview of HFNC’s technical aspects and physiological effects.

The book is intended for pneumologists, intensivists, anesthesiologists, ED doctors, rehabilitation therapists, internists and oncologists, as well as fellows and nurses in these fields.

Annalisa Carlucci has been an Associated Professor in Pulmonary Medicine -University of Insubria-Varese since 2019. Physician at the Pulmonary Rehabilitation Department of the Istituti Clinici Scientifici- IRCCS, Pavia, Italy since 2000. She completed her specialization in Pulmonary Disease at the Catholic University of Rome in 1997. Her main field of interest is non-invasive ventilation in an acute and chronic setting. Other research fields include weaning from mechanical ventilation, respiratory muscle (EMG, mechanics) and pulmonary rehabilitation. She is the author of more than 50 articles published in peer-reviewed journals and 7 books chapters. For the past several years she has been working with high-flow nasal cannula, above all in rehabilitation. She recently published a paper about the use of the HFNC for rehabilitation in COPD and is working on several protocols in this field.  She is also involved in didactic activities held at hospitals (e.g. Master of Physiotherapy and Pulmonary Rehabilitation at the University of Milan and a Master of Respiratory Intensive Care at University Alma Mater Studiorum in Bologna), as well as at national and international conferences.

Salvatore Maurizio Maggiore has been a Full Professor of Anaesthesiology and Critical Care Medicine at the “Gabriele d’Annunzio” University of Chieti-Pescara, Italy, and Chief of the general ICU at the SS. Annunziata Hospital of Chieti, Italy since 2018. He graduated  in Anaesthesiology and Intensive Care Medicine from the University of Bari, Italy in 1998, undertook a clinical and research fellowship in the medical ICU of the Henri Mondor hospital, Paris XII University, and worked as a senior physician and Assistant Professor at the A. Gemelli hospital, Catholic University of Rome, Italy, before being appointed as Associate Professor of Anaesthesiology and Critical Care Medicine at the “Gabriele d’Annunzio” University of Chieti-Pescara, Italy. He is currently in charge of the Residency Program for Anaesthesiology and Critical Care Medicine and teaches on acute respiratory failure, respiratory pathophysiology, and mechanical ventilation in several other Residency Programs and in the Medical Degree at the G. d’Annunzio University of Chieti-Pescara, Italy, and in other Master Degree courses at other Italian Universities (Bologna, Milan). His main research interests are focused on acute respiratory failure, respiratory mechanics, invasive and non-invasive ventilatory support, cardiovascular effects of mechanical ventilation, and ethics in intensive care.  He is the author of over 100 peer-reviewed papers, reviews, editorials and book chapters, and wrote several articles on the application of High-Flow Nasal Cannula in critically ill patients. He has received several awards and grants from the Italian Society of Intensive Care, the European Respiratory Society, and the American Thoracic Society, and is regularly invited to speak at the main national and international congresses in Pulmonology and Intensive Care Medicine. He is a member of several Scientific Societies (SIAARTI, ESA, ESICM). He was a Deputy Editor of the journal “Intensive Care Medicine” (2007-2013) and the former Chair of the Editorial and Publishing Committee and a former member of the Executive Committee of the European Society of Intensive Care Medicine (ESICM) (2011-2014).