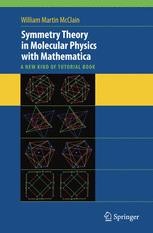 A new kind of tutorial book

Prof. McClain has indeed produced "a new kind of tutorial book."  It is written using the logic engine Mathematica, which permits concrete exploration and development of every concept involved in Symmetry Theory.  The book may be read in your hand, or on a computer screen with Mathematica running behind it.  It is intended for students of chemistry and molecular physics who need to know mathematical group theory and its applications, either for their own research or for understanding the language and concepts of their field.  The book has three major parts:

Part I begins with the most elementary symmetry concepts, showing how to express them in terms of matrices and permutations.  These are then combined into mathematical groups.  Many chemically important point groups are constructed and kept in a Mathematica package for easy reference.  No other book gives such easy access to the groups themselves.  The automated group construction machinery allows you to tabulate new groups that may be needed in research, such as permutation groups that describe flexible molecules.

In Part II, mathematical group theory is presented with motivating questions and experiments coming first, and theorems that answer those questions coming second.  You learn to make representations of groups based on any set of symmetric objects, and then to make Mathematica operators that carry out rep construction as a single call.  Automated construction of representations is offered by no other book.  Part II follows a reconstructed trail of questions, clues and solid results that led Issai Schur to a complete proof of the Great Orthogonality.

In Part III, the projection operators that flow from the Great Orthogonality are automated and applied to chemical and spectroscopic problems, which are now seen to fall within a unified intellectual framework.  The topics include chemical bonding in symmetric molecules, molecular vibrations and rigorous reasoning about quantum mechanical matrix elements.  As a concrete example of the enormous power of the automated projectors, the tensor operators for two- and three- photon processes are projected under all tabulated groups.  All the machinery presented is general, and will work with new groups that you may construct.  Finally, there is machinery that accepts as input the multiplication table of any group and returns as output its character table.  This will be of great use to spectroscopists who deal with flexible molecules belonging to permutation groups, which are too numerous even for a Mathematica package.

W.M. McClain started working with Mathematica as soon as it appeared in 1988, bringing over ten years of nearly daily experience with Mathematica to this book.  He has written many research papers that use Mathematica and has also used group theory throughout his 20-year research career in nonlinear spectroscopy.  He published the first group theoretic analysis of nonlinear tensors in vibronic sprectroscopy, regarded by many as a landmark paper.

“The layout of McClain’s book definitely reflects the author’s idea of the book, together with multiple examples … . First of all it is partitioned into three Parts which are further spilt into 48 Chapters and three Appendices. … Summarizing, it is likely that tutorial book that many students and PhD students of chemistry, atomic and molecular physics are expected to percept the concept of molecular symmetry practically, interactively via Mathematica with molecules and thus to directly apply them in their own research.” (Eugene Kryachko, Zentralblatt MATH, Vol. 1187, 2010)