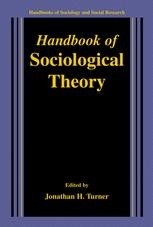 Sociology is experiencing what can only be described as hyperdifferentiation of theories - there are now many approaches competing for attention in the intellectual arena . From this perspective, we should see a weeding out of theories to a small number, but this is not likely to occur because each of the many theoretical perspectives has a resource base of adherents. As a result, theories in sociology do not compete head on with each other as much as they coexist.

This seminal reference work was brought together with an eye to capturing the diversity of theoretical activity in sociology - specifically the forefront of theory. Contributors describe what they themselves are doing right now rather than what others have done in the past. The goal of this volume is to allow prominent theorists working in a variety of traditions - who wouldn't usually come together - to review their work. The chapters in this volume represent a mix of theoretical orientations and strategies, but these these theories are diverse and represent the prominent theoretical discussions in sociology today. Some areas included are:

Section I: Theoretical Methodologies and Strategies

Section IV: Theorizing from the Systemic and Macrolevel

SectionVII: Theorizing from Assumptions of Rationality

This handbook will be of interest to those wanting a broad spectrum and overview of late 20th - early 21st century sociological theory.

"This handbook is a marvelous accomplishment. Organized in seven sections, it skillfully captures, maps, and interprets the wide range of theory that now operates in the discipline. Each of its 31 chapters is carefully crafted by a master theorist. [...] This is a glittering gallery of sociological theory written by the preeminent theorists working in the field today [...] there are gemlike chapters that show creative theorists at work, doing what good theorists do best, which is figuring out how the social world works."
(American Journal of Sociology, 2003)

"Instead of compiling a compendium of old, dusty standards, Turner gathered the newest, most-viable theories in sociology, ‘with an eye to capturing the diversity of theoretical activity.’ … From methodological and empirical concerns to cultural and communicative concepts, as well as computational and postmodern approaches, The Handbook of Sociology Theory covers the gamut of modern sociological research. … will take one a long way to understanding the history and the current thoughts of sociology and the social sciences." (Roy Christopher, frontwheeldrive.com, January, 2007)