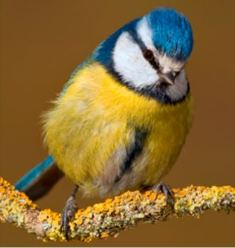 Male blue tits with white cheeks are healthier and more likely to mate with higher quality partners than their counterparts with duller cheek feathers. Having purer white cheeks also indicates that a blue tit was better able to overcome an infection with parasites during the previous year. This is according to Elisa Pérez Badás of the Museo Nacional de Ciencias Naturales in Spain. She is lead author of a study published in Springer’s journal The Science of Nature.

Previous research has shown that the food consumed by a bird, as well as its general well-being, can influence the colour of its feathers. Scientists also know that hardships suffered by birds in one season can be carried over into the next.

In this study, Badás and her research team wanted to test whether difficulties encountered by the blue tit (Cyanistes caeruleus) during the breeding season might influence the precise intensity of the new blue, white and yellow feathers growing once these birds have moulted. In the life cycle of this small bird, which is widespread in forests in Europe and Western Asia, moulting only happens once the breeding season is completed. Therefore, the birds show off their new plumage until the end of the next breeding season.

To prove their assumptions, the research team monitored a population of blue tits living in a forest in central Spain over the course of two breeding seasons. In the first season, the researchers caught the birds and took blood samples to detect whether the blue tits suffered from parasitic infections. The team also used a spectrophotometer to gauge the spectrum of colour of the birds’ feathers. These results were compared with the hues, levels of saturation and luminance that blue tits are known to see. In the following season, the researchers noted the birds’ mating patterns, and how these were influenced by changes that might have occurred in particular birds’ feather colours.

Overall, the researchers found that males in a better physical condition (males that weighed more) during the highly demanding nestling provisioning stage sported brighter, whiter cheeks. Those who were not infected much by the malaria parasite Plasmodium while breeding also showed purer white cheek feathers in winter. According to Pérez Badás, this indicates that their feathers were of a better quality, and that intense parasitic infections can have an effect on a bird’s life cycle.

“In the following season, those males with brighter cheeks paired with females that had noticeably brighter cheek patches compared to the male's previous mate,” adds Badás.

The results therefore suggest that the conditions that male blue tits experienced during reproduction are likely to affect moult and thus feather colouration, at least in their white facial feathers. This, in turn, enables the stronger males to find brighter females than the partners they paired with in the previous spring.

“Members of the same species were quite able to pick up such colour differences,” notes Badás.

Note: Elisa Pérez Badás is now based at the University of Leeds in the UK.