Not all Republicans are climate change doubters 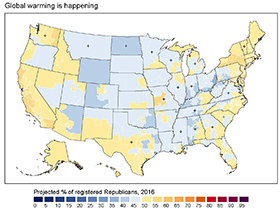 The idea that all Republicans think climate change isn’t happening is a myth. A new study published in Springer’s journal Climatic Change finds substantial differences in the climate change views of both Republicans and Democrats across different states and congressional districts. The research is led by Matto Mildenberger of the University of California Santa Barbara together with colleagues at Yale University and Utah State University.

The research team combined information from state voter files with climate and energy opinions collected online between 2008 and 2016 by the Yale Program on Climate Change Communication and the George Mason Center for Climate Change Communication. The data allowed them to estimate the geographic distribution of Republican and Democratic climate and energy opinions across the country.

The differences in climate opinions also translate into party members’ policy preferences. There is, for instance, majority Republican support for Renewable Portfolio Standard (RPS) policies in 111 congressional districts currently held by Republican Members of Congress. Similarly, a majority of Republicans in every state but Wyoming support regulating carbon dioxide as a pollutant. And in particular, relative to the average national party member, Republicans in Southern Florida strongly support regulating carbon pollution.

“While subsets of the Republican voting public do not support climate policies and hold views consistent with party elite, Republican climate and energy opinions are more varied than might be presumed from political discourse,” says Mildenberger. “Similarly, the results emphasize consistent support among Democrats for climate and energy policies, despite variation in belief intensity.”

The research team says that the geography of partisan climate opinions in the US highlighted in the study should inform decision-makers, educators, and communicators working at sub-national scales. Co-author Peter Howe says that an understanding of how support for climate change and energy reforms differs at local scales is especially important given the current policymaking context. Despite the Trump administration’s withdrawal from the Paris Climate Agreement in mid-2017, state and local governments continue to act as critical sites of climate and energy policymaking in the US.

Maps that visualize the Republican and Democratic distribution of climate beliefs have been made available by the authors at http://climatecommunication.yale.edu/visualizations-data/partisan-maps-2016/

About the journal Climatic Change