A Perspective on Academic Plagiarism 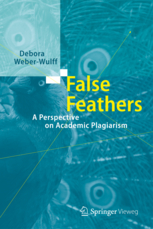 Academic plagiarism is nothing new, and it most certainly did not begin with the advent of the Internet. Teachers have been struggling for decades in countries all over the globe to find appropriate methods for dealing with the problem. How do we teach good scientific practice? How do we find and document plagiarism? And how do we deal with those who have been caught?

False Feathers - A Perspective on Academic Plagiarism by Debora Weber-Wulff collects material on the various aspects of plagiarism in education. Because of the widespread interest in the many doctoral dissertations in Germany that have been found to be plagiarized, including those from high-ranking politicians and members of the scientific community, special attention is given to the situation in Germany, past and present.

“It has become increasingly clear that plagiarism is a systemic problem and is not just restricted to Germany. There are people at all levels of academia who apparently either do not know how to properly use the materials of others or are willing to take shortcuts,” says Weber-Wulff.

The book explains how plagiarism in dissertations is found and documented. In addition it identifies and elaborates on many different strategies for identifying plagiarism and includes an overview of plagiarism policies in different countries.

Debora Weber-Wulff is a Professor of Media and Computing at the University of Applied Sciences, HTW Berlin. She studied applied physics in San Diego, CA, USA and Kiel, Germany. The topic of plagiarism has been one of her main interests since 2002, and she is active in the German VroniPlag Wiki group, which has been documenting plagiarism in dissertations since 2011. She blogs in English on scientific misconduct (copy-shake-paste.blogspot.com) and oversees a German-language portal on plagiarism (plagiat.htw-berlin.de).