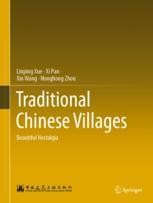 This book uses the concept of the region to introduce traditional Chinese villages in ten typical areas. Most of the villages have been included in the World Cultural Heritage List or the Tentative List and reflect the diversity of rural and traditional life. Richly illustrated with pictures of architectural decorations, dwellings, day-to-day country life and aerial views of settlements, it not only enhances readers’ knowledge of China’s traditional architectural culture but also provides inspiration for architectural creation. It is a valuable resource for graduate students, lecturers and researchers in the field of traditional villages, heritage conservation and Chinese architectural culture.

Linping Xue is currently an associate professor at the School of Architecture and Art at Beijing Jiaotong University. He graduated from the School of Architecture and Urban Planning of Tongji University with a Ph.D. in 2004. He was a visiting scholar at the University of Sheffield in the United Kingdom in 2011. His main research interests are rural architecture, traditional dwellings and architectural design with regional characteristics. He has published academic works such as Traditional Chinese Theater Architecture, Series of Shanxi Ancient Villages and Towns (25 volumes have been published at the end of 2015), Traditional Chinese Villages (Volume I): Traditional Beijing Villages and so on, as well as more than 50 academic papers. He has hosted more than 10 vertical research projects including National Natural Science Foundation, National Social Science Foundation and Beijing Natural Science Foundation. He has hosted over 50 practical projects on planning and design, and has won three national awards on outstanding urban and rural planning and design. His social academic part-time jobs include: member of the committee of experts on traditional residential protection of the Ministry of Housing and Urban-rural Development, deputy head of the working group on traditional residential protection, deputy director of the expert committee on traditional villages and residential protection of Shanxi Province, executive deputy head of the expert group, member of the expert group on the overall protection and utilization of traditional villages of Shanxi Provincial Cultural Relics Bureau.

Xi Pan is currently an associate professor in the School of Architecture and Art, Beijing Jiaotong University. She obtained her bachelor’s degree in architecture and Ph.D. in engineering from Tsinghua University. In 2012, she spent half a year in the University of Sheffield in the United Kingdom as a visiting researcher. She is also the member of ICOMOS (International Council on Monuments and Sites), ICOMOS China, Academic Committee of Traditional Dwelling of the Architectural Society of China, and working group on traditional residential protection of the Ministry of Housing and Urban-rural Development.

Xi Pan’s research focuses on vernacular architecture and traditional villages. She has published more than 30 articles in journals such as Architectural Journal, Architect and New Architecture. She is the author of Building Paradigm of Naxi Vernacular Architecture, Architecture and Cultural Anthropology, and the translator of An Anthropology of Architecture. Funded by The National Natural Science Foundation, National Social Science Foundation, Ministry of Culture and other institutions, Xi Pan has carried out quite a few research projects in this area. And she is also active as a practitioner and volunteer in rural China; one of her projects, the IUCN Streamshoots Environmental Education Centre won the WA Social Equality Award in 2018.

Xin Wang, Ph.D. in Architecture from Tsinghua University, is currently teaching at the School of Architecture and Design in Beijing Jiaotong University. His main academic interests are traditional settlements and regional architecture. He has published dozens of academic papers in journals such as Architectural Journal, Community Design and Huazhong Architecture. He has participated in the translation of the academic works, such as Shangzhuang Ancient Village, 20th-Century World Architecture: The Phaidon Atlas, Herzog & de Meuron 1989-1991: The Complete Works (Volume 2), National Geographic-Around the World in 125 Years. As a key researcher, he has participated in the Research on Environmental Adaptability Design Patterns and Strategies from the Perspective of Architectural Regionality, supported by the National Natural Science Foundation of China. He is now a member of the working group of the Traditional Dwelling Conservation Expert Committee of the Ministry of Housing and Urban Development and of the expert committee of the Traditional Village Conservation and Development of Shanxi Province. He has completed more than ten practical projects on traditional village protection and development and regional architectural design.