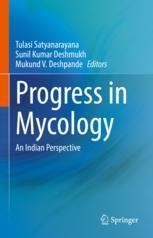 Indian mycologists have extensively studied various groups of fungi such as soil fungi, aquatic fungi, marine fungi, endophytic fungi, fungi associated with man and animals. Though several books on various aspects of fungi are published, this is the first account of the history and developments in mycology in India. It discusses at length various stages of development of mycology including both classical and biotechnological aspects. It begins with a historical account of Indian mycology, followed by a description of research on fossil fungi. Further chapters cover the latest updates on different taxonomic groups of fungi. A dedicated section describes the roles and applications of fungal endophytes. The book also includes research in other important areas such as mushrooms and wood rotting fungi. Different chapters are written by leading mycologists.

This book is useful to students, teachers and researchers in botany, microbiology, biotechnology and life sciences, agriculture and industries using fungi to produce various valuable products.

Prof. T. Satyanarayana has been Professor Emeritus at the Division of Biological Sciences & Engineering, Netaji Subhas University of Technology, New Delhi after superannuating from the University of Delhi in June 2016. He has over 280 scientific papers and reviews, 11 books and 3 patents to his credit. He is a fellow of the National Academy of Agricultural Sciences (NAAS), Academy of Microbiological Sciences (AMSc), Biotech Research Society (I) [BRSI], Mycological Society of India (MSI) and Telengana Academy of Sciences. He is a recipient of Dr. Manjrekar award of AMI, Dr. Agnihotrudu Memorial award of MSI and Malaviya Memorial award of BRSI for his significant contributions. He mentored 30 scholars for Ph.D., and was president of AMI and MSI. He successfully completed 17 major research projects sanctioned by various Govt. agencies. His research efforts have been focused on microbial diversity and enzymes, metagenomics, carbon sequestration and bioethanol production from lignocellulosics.

Dr. Sunil Kumar Deshmukh received his Ph.D. in Mycology from Dr. H.S. Gour University, Sagar (M.P.) in 1983. A veteran industrial mycologist who spent a substantial part of his career at Hoechst Marion Roussel Limited [now Sanofi India Ltd.], Mumbai and Piramal Enterprises Limited, Mumbai in drug discovery. He has to his credit 8 patents, 125 publications and12 books on various aspects of Fungi and natural products of microbial origin.  He was the president of the Mycological Society of India (MSI).  He is a fellow of MSI, the Association of Biotechnology and Pharmacy, the Society for Applied Biotechnology and the Maharashtra Academy of Sciences.  He was the Fellow at Nano-Biotechnology Centre, TERI, New Delhi, and Adjunct Associate Professor in Deakin University, Australia till Jan. 2019 who had been working on the development of natural food colours, antioxidants and biostimulants through nanotechnology intervention.

Dr. Mukund V. Deshpande obtained his PhD in 1982 in Biochemistry and D.Sc. in Microbiology of the University of Pune in 1994. He has been working extensively on the use of fungi and fungal products in Biotechnology. Dr. Deshpande successfully completed more than 35 research projects funded by national and international funding agencies like Indo-Swiss Collaboration in Biotechnology (ISCB) for development of mycoinsecticide, Indo-Belarus programme of DBT on biopesticides, Indo-Mexico programme on fungal dimorphism, to name a few. Dr. Deshpande is an elected fellow of Maharashtra Academy of Sciences (FMASc, 1994) and the Society for Biocontrol Advancement (FSBA, 2010). He has to his credit more than 150 research papers, reviews and chapters, 8 patents, 8 books and a number of popular articles. He has his own start-up Greenvention Biotech located in Urli-Kanchan, Pune for the translational activities in Agricultural Biotechnology.