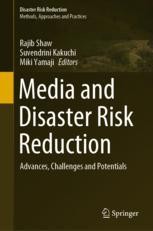 This book analyzes recent advances, trends, challenges and potentials of the role of media in disaster risk reduction. Collaboration, co-design and co-delivery with other stakeholders in science technology, private sectors, and civil society are found to be effective in reaching people and communities.

The media is considered to be of utmost importance in all phases of disasters, before, during and after, with different types of media having different proactive roles to play in disaster risk reduction. Before disasters, they play essential roles not only in bringing early warning to people but also in enhancing their perception of the need to take action. At during- and post-disaster response recovery phases, community radio and social media are the key. These necessitate a resilient media infrastructure as the core of uninterrupted coverage.

Media literacy has become an important issue for several stakeholders, including governments. In addition, more focus is placed on media governance to look at the priorities of disaster risk reduction initiatives within the media. All of these are considered to lead to trust in the media, which further improves people’s disaster response actions based on information from the media, before and during disasters.

Covering different aspects of media, this book is a valuable source for students, researchers, academics, policy-makers and development practitioners.
Show all
About the authors

Rajib Shaw is a professor in the Graduate School of Media and Governance in Keio University, Japan. He is also a senior fellow of the Institute of Global Environmental Strategies (IGES) Japan, and the chairperson of SEEDS Asia and CWS Japan, two Japanese NGOs. He is, additionally, the co-founder of the  Delhi (India)-based social entrepreneurial startup Resilience Innovation Knowledge Academy (RIKA). Earlier, he was the executive director of Integrated Research on Disaster Risk (IRDR) and was a professor at Kyoto University. His expertise includes disaster governance, community-based disaster risk management, climate change adaptation, urban risk management, and disaster and environmental education. Professor Shaw was the chair of the United Nations Science Technology Advisory Group (STAG) for disaster risk reduction, and is also the co-chair of the Asia Science Technology Academic Advisory Group (ASTAAG). In addition, he is the CLA (Coordinating Lead Author) for the Asia chapter of IPCC’s 6th Assessment Report.  He is the editor-in-chief of the Elsevier journal Progress in Disaster Science and series editor of a Springer book series on disaster risk reduction. Prof. Shaw has published more than 48 books and over 400 academic papers and book chapters.

Suvendrini Kakuchi is a Sri Lankan journalist and author based in Tokyo. She focuses on development journalism covering such issues as education, environment, disasters, gender and conflict resolution. Her long reporting career of more than 30 years has spanned South Asia and the Asia Pacific region, and her work comprises writing for traditional media and research-based publications and books. Among her disaster reporting assignments from the field is the Indian Ocean tsunami in 2004, the Great Hanshin earthquake in 1995, and the Great East Japan disaster in 2011. She has also produced disaster risk-reduction publications, documentary films, and journalist training, and has developed media manuals with guidelines for news editors making assignments on disasters.

Miki Yamaji is pursuing her graduate studies on media and governance at Keio University.  She is also a senior producer at NHK Educational, conducting several programs on disaster education. In her earlier career, she had long experience as an editor for a publishing company and also as a journalist for a newspaper company in Japan.