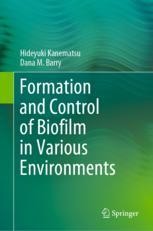 Formation and Control of Biofilm in Various Environments

This book provides excellent techniques for detecting and evaluating biofilms: sticky films on materials that are formed by bacterial activity and produce a range of industrial and medical problems such as corrosion, sanitary problems, and infections. Accordingly, it is essential to control biofilms and to establish appropriate countermeasures, from both industrial and medical viewpoints. This book offers valuable, detailed information on these countermeasures. It also discusses the fundamentals of biofilms, relates various substrates to biofilms, and presents a variety of biofilm reactors.
However, the most important feature of this book (unlike others on the market) is its clear focus on addressing the practical aspects from an engineering viewpoint.  Therefore, it offers an excellent practical guide for engineers and researchers in various fields, and can also be used as a great academic textbook.

Dr. Hideyuki Kanematsu, Ph.D., FIMF (Fellow of the IMF) is a Full Professor at the Department of Materials Science and Engineering, National Institute of Technology (NIT) (KOSEN), Suzuka College in Japan. After holding various administrative positions at the college (Dean of the MS& E Department, 2010–2014, Deputy President, 2014–2018, etc.), he is currently a researcher in Materials Surface Science & Engineering and the research advisor for the college. Dr. Kanematsu is particularly interested in biofilms and the interfacial phenomena between metallic surfaces and organisms from an environmental science point of view. He holds a B.E. (1981), an M.E. (1983), and a Ph.D. in Materials Science and Engineering (1989), all from Nagoya University. He is a member of the National Association for Surface Finishing (NASF), as well as the Institute of Metal Finishing (IMF), the Minerals, Metals & Materials Society (TMS), ASM International, the Electrochemical Society (ECS), American Chemical Society (ACS), the Japan Institute of Metals (JIM), the Iron & Steel Institute of Japan (ISIJ), Surface Finishing Society of Japan (SFSJ), the Electrochemical Society of Japan (ECSJ), the Japan Society for Heat Treatment (JSHT), Japan Thermal Spray Society (JTSS), etc. He is very active in all of these organizations, as a member or board member. He also has many honors and publications to his credit. He was awarded a Marquis Who’s Who Lifetime Achievement award for his outstanding career and is a NASF Scientific Achievement Award Winner.
Dr. Dana M. Barry, Ph.D., is a Research Professor at Clarkson University’s Department of Electrical and Computer Engineering. She also serves as a Professor and Scientific Board President for Ansted University, an Instructional Support Assistant for the State University of New York at Canton (SUNY Canton), and an officer and Chemistry Ambassador for the American Chemical Society. She has previously worked as a Chemical Engineer, Chemical Consultant, Senior Technical Writer, and Editor at Clarkson University’s Center for Advanced Materials Processing, and as a Host and Co-Producer for the television series Sensational Science (that aired in northern New York State for several years).
She has served as a Visiting Professor overseas on numerous occasions. She has also presented invited Keynote Talks in the following countries: Malaysia (2001), Japan (2008), China (2011), Slovenia (2014), and Hungary (2019). She holds five graduate degrees including a Ph.D. in Engineering from Osaka University, Japan. In addition, Dr. Barry has many honors and nearly 300 professional publications to her credit. Her special awards include a Citation of Excellence for her keynote speech in Budapest, Hungary (2019); a Marquis Who’s Who Lifetime Achievement Award for her Outstanding Professional Dedication and Accomplishments (2017); an Outstanding Volunteer Award from the American Chemical Society (2017); and 21 Consecutive APEX Awards for Publication and Communication Excellence sponsored by Communication Concepts in VA (1996–2016).