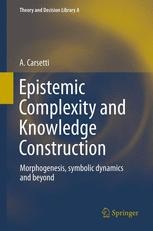 Morphogenesis, symbolic dynamics and beyond

The volume as its first target aims at clarifying that peculiar entanglement of complexity, causality, meaning, emergence and intentionality that characterises the unfolding of the "natural forms" of human cognition

As is well known, cognition is not only a self-organising process. It is also a co-operative and coupled process. If we consider the external environment as a complex, multiple and stratified Source which interacts with the nervous system, we can easily realise that the cognitive activities devoted to the "intelligent" search for the depth information living in the Source, may determine the very change of the complexity conditions according to which the Source progressively expresses its "wild" action. In this sense, simulation models are not neutral or purely speculative: the true cognition actually appears to be necessarily connected with successful forms of reading, those forms, in particular, that permit a specific coherent unfolding of the deep information content of the Source. Therefore, the simulation models, if valid, materialise as "creative" channels, i.e., as autonomous functional systems, as the very roots of a new possible development of the entire system represented by mind and its Reality. From a general point of view, the objectivity of Reality is also proportionate to the autonomy reached by cognitive processes.

In this sense, at the level of cultural evolution, reference procedures act as guide, mirror and canalisation with respect to primary information flows and involved selective forces: they offer themselves as the actual instruments for the constant renewal of the code, for the invention and the actual articulation of an ever-new incompressibility. From an effective point of view, they appear as indissolubly linked to the successive definition of specific (and innovative) measures of the epistemic complexity. These measures cannot concern only statistical rarity (Shannon) or computational incompressibility (Kolmogorov-Chaitin), on the contrary they should also be able to take into account the coupled connection between the Source and the cognitive agent, the evolution of this connection as well as the successive constitution of meaning as symbolic form. Hence the possible (and necessary) definition of new axiomatic systems, new measure spaces, the real displaying of processes of continuous reorganisation at the semantic level. Indeed, it is only through a complete, first-order "reduction" and a correlated non-standard second-order analysis that new incompressibility will actually manifest itself. Therefore, the reference procedures appear to be related to a process of multiplication of minds, as well as to a process of "clarification" of meanings which finally emerges as vision via principles.

“Book constitutes a major contribution to our understanding of the mechanisms of knowledge construction … . a fine work, a fascinating set of discussions concerning an extremely interesting area. It contributes to the current and lively debate about the nature of cognition and about the role played by symbolic dynamics and epistemic complexity in the development of biological and cognitive activities. Anyone who is interested in functional and neural models concerning knowledge construction will be informed by the wealth of material presented in this volume.” (Magali Fernández-Salazar, Minds & Machines, January, 2014)