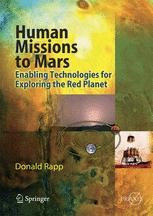 In “Human Missions to Mars” Donald Rapp looks at human missions to Mars from an engineering perspective. He begins by describing the pros and cons of robotic exploration versus human exploration and then examines the ideas for sending humans to Mars from the point of view of both the enthusiast and the skeptic. Chapter 2 describes how space missions are planned and how they may be achieved as a sequence of separate steps. Chapter 3 deals with the complex issues relating to the outward journey to Mars and the return leg. The author deals with propulsion systems and with the analysis of the various trajectories which may be utilized for such a mission. He divides mission into a number of stages: Earth’s surface to low-Earth orbit (LEO); departing from LEO; Mars orbit insertion and landing; ascent from Mars; trans-Earth injection from Mars orbit and Earth orbit insertion and landing. Chapter 4 discusses a wide range of elements critical to a human Mars mission, including life support consumables, radiation effects and shielding, microgravity effects, abort options and mission safety, possible habitats on the Martian surface and aero assisted orbit insertion and entry decent and landing.

For any human mission to the Red Planet the possible utilization of any resources indigenous to Mars would be of great value and such possibilities are discussed in Chapter 5. The use of indigenous resources on the Moon is described as a precursor to the availability of similar resources on Mars and issues such as fuelling Mars-bound craft from lunar resources, the use of lunar ferries, staging, assembly and refueling in near-Earth space are all discussed. The important applications arising from the transportation of hydrogen to Mars are also described. Chapter 6 deals with a range of previous Mars mission studies and the technologies they employed. Chapter 7 looks as how NASA is planning for its return to the Moon, and the use of the Moon as a stepping stone to Mars. Chapter 8 presents the author’s detailed analysis of why, in his opinion, the current NASA approach will fail to send humans to Mars before 2080. The book concludes with three appendices describing the use of solar energy on the Moon and on Mars and the value of indigenous water on Mars.

"A skeptic’s view on the realities of sending a human mission to Mars in the 21st century. … Human Missions to Mars is hardbound, and Rapp’s use of supporting formula, graphs, and technical illustrations … make it clear that this volume is meant to be used as a reference book in research institutions, technical libraries, and scientific organizations. However, Rapp’s engaging writing style and pragmatic view on this subject also makes it an interesting read for the armchair Mars explorer … ." (Anthony Young, The Space Review, March, 2008)

"This book looks at human missions to Mars from an engineering perspective. … The book includes appendices describing the use of solar energy on the Moon and on Mars and the value of indigenous water on Mars. This book was written for space scientists and engineers, intermediate-level undergraduates, and postgraduate researchers studying every aspect of human missions to Mars." (The Lunar and Planetary Information Bulletin, 2008)

"Rapp’s book is a very readable, critical view of possible explorations of Mars. … The book discusses in detail the many technologies that must be developed and demonstrated before a successful human mission to Mars can occur. … The appendixes give significant details about solar energy and water on Earth’s moon and Mars. The work is an excellent analysis of the difficulties posed by a human mission to mars. … Summing Up: Recommended. Upper-division undergraduate through professional collections." (D. B. Mason, CHOICE, Vol. 45 (9), 2008)

"In this book, Donald Rapp … sets out to provide a critical assessment of the requirements for human missions to Mars from an engineering perspective. … I found it informative because I learned a lot about the intricacies of Mars mission architectures and the inherent engineering challenges. … it is refreshing to read a detailed and independent study by someone who has no vested interest in any ‘official’ plans for human space missions." (Ian Crawford, Eos, Vol. 89 (36), 2008)