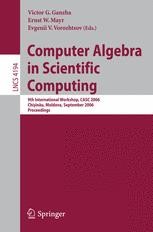 This volume contains revised versions of the papers submitted to the workshop by the participants and accepted by the program committee after a thorough reviewing process. The collection of papers included in the proceedings covers not only various expanding applications of computer algebra to scienti?c computing but also the computer algebra systems themselves and the CA algorithms. The eight earlier CASC conferences, CASC 1998, CASC 1999, CASC 2000, CASC 2001, CASC 2002, CASC 2003, CASC 2004, and CASC 2005 were held, - spectively, in St. Petersburg, Russia, in Munich, Germany, in Samarkand, Uzb- istan, in Konstanz, Germany, in Crimea, Ukraine, in Passau, Germany, in St. Petersburg, Russia, and in Kalamata, Greece, and they proved to be successful. It was E. A. Grebenikow (Computing Center of the Russian Academy of S- ences, Moscow) who drew our attention to the group of mathematicians and c- puter scientists at the Academy of Sciences of Moldova conducting research in the ?eld of computer algebra. We were impressed that this group not only is concerned with applications of CA methods to problems of scienti?c computing but also c- ries out research on the fundamental principles underlying the current computer algebra systems themselves, see also their papers in the present proceedings v- ume. It was therefore decided to organize the 9th workshop on Computer Algebra in Scienti?c Computing, CASC 2006, in Chi¸ sin? au, the capital of Moldova.