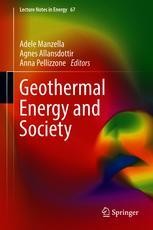 This book addresses the societal aspects of harnessing geothermal resources for different uses, such as power production, heating and cooling. It introduces a theoretical framework for a social scientific approach to the field, and presents a preliminary collection of empirical case studies on geothermal energy and society from across the world. By providing a conceptual and methodological framework to the study of geothermal energy and societies, it brings together information and analyses in the field that to date have been sparse and fragmented.

The contributors explore the diverse aspects of the relationship between the harnessing of geothermal resources and the societies and local communities in which these developments take place. After introducing geothermal technologies, renewable energy concepts as well as their social and policy context and the regulative and environmental aspects of geothermal energy, the book analyzes and discusses twelve global case studies, and compares the social engagement tools applied with those used in other sectors.

Of interest to researchers from a range of disciplines who wish to explore the issues surrounding energy and society, it is also a valuable resource for geothermal experts and postgraduate students wish to study the field in greater detail.

Adele Manzella is a senior scientist working at the Italian National Research Council (CNR), and is involved in geothermal field exploration and theoretical investigations of geothermal systems in Italy and abroad. She coordinates national geothermal evaluation projects for CNR, and has participated in various national projects dedicated to crustal, volcanological and geothermal exploration. She has led the CNR participation in most of the EU funded projects in the geothermal sector: I-GET (Integrated Geophysical Exploration Technologies for deep fractured geothermal systems, FP6-STREP), ENGINE (ENhanced Geothermal Innovative Network for Europe, FP6-Coordination Action), Development of the young researchers competences to UE standards in the geothermal field (FP6-Leonardo da Vinci: A Community Vocational Training Action Programme) and GEOELEC (Develop Geothermal Electricity in Europe for a renewable energy mix, FP7-Intelligent Energy; and the running projects IMAGE (Integrated Methods for Advanced Geothermal Exploration, FP7), Geothermal ERA-NET (FP7) and DESCRAMBLE (Drilling in dEep, Super-CRitical AMBient of continentaL Europe), as well as the recently approved DG-ETIP, which supports the activities of the Geothermal Technology Platform. Her current activities include research, training, and promotion of geothermal energy.

Agnes Allansdottir is a social psychologist researcher in Siena Italy, who studied at the London School of Economics and Political Science. She has extensive experience of empirical research on societal dialogues on science and technology in comparative international context. From 1996 she lectured on psychology of communication, science communication, bioethics and science in society at the University of Siena. She has been a principal investigator on a series of EC funded international research projects on life sciences and society, climate change, public engagement, ethically sensitive technologies and public ethics. She is currently a member of an international group of expert of the recently founded Lombardy Regional Forum for Research and Innovation She has repeatedly given advice to international and national policy making bodies and has presented and published widely in high-level international journals, including Nature, Nature Biotechnology, Plos One and PNAS.

Anna Pellizzone is a science writer and an independent researcher. A natural scientist, she holds a master’s in Science Communication and a PhD in Earth Sciences, obtained with a thesis on the social impact of geothermal technologies in collaboration with the Italian National Research Council. Her research interests are focused on STS (Science and Technology Studies) and she is the author of several academic papers related to social acceptance of geothermal energy. Since 2006 she has also been writing also for generalist newspapers, magazines and websites and since 2016 Anna has been collaborating with Fondazione Bassetti on the SMART-map project.