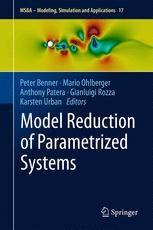 The book represents the state of the art in the development of reduced order methods. It contains contributions from internationally respected experts, guaranteeing a wide range of expertise and topics. Further, it reflects an important effor

t, carried out over the last 12 years, to build a growing research community in this field.

Though not a textbook, some of the chapters can be used as reference materials or lecture notes for classes and tutorials (doctoral schools, master classes).

Peter Benner is Director of the Max Planck Institute for Dynamics of Complex Technical Systems and head of the department “Computational Methods in Systems and Control Theory”. Moreover, he is a Professor at the TU Chemnitz and Adjunct Professor at the Otto-von-Guericke University Magdeburg. He serves on the editorial board of several scientific journals, including Advances in Computational Mathematics and the SIAM Journal on Matrix Analysis and Applications.

Mario Ohlberger is a Full Professor of Applied Mathematics and Managing Director of Applied Mathematics at the University of Münster’s Institute of Analysis and Numerics. He is an Associate Editor of five mathematical journals, including SIAM Journal on Scientific Computing. He is a member of the Center for Nonlinear Science, the Center for Multiscale Theory and Computation, and the Cluster of Excellence “Cells in Motion”.

Anthony T. Patera is the Ford Professor of Engineering and a Professor of Mechanical Engineering at MIT, and Co-Director of the MIT Center for Computational Engineering.  His research interests include partial differential equations, computational methods, model order reduction, a posteriori error estimation, and data assimilation. Professor Patera holds SB and SM degrees in Mechanical Engineering from MIT, and a PhD in Applied Mathematics, also from MIT. He served as Co-Editor-in-Chief of the journal Mathematical Modeling and Numerical Analysis from 2003 to 2012.
Gianluigi Rozza has been an Associate Professor of Numerical Analysis and Scientific Computing at SISSA, International School for Advanced Studies since 2014. He holds a degree in Aerospace Engineering from Politecnico di Milano (2002) and a PhD in Applied Mathematics at Ecole Polytechnique Federale de Lausanne (2005). He was a post-doctoral research associate at the Massachusetts Institute of Technology (MIT) Center for Computational Engineering (2006-08), then a Researcher and Lecturer at EPFL (2008-2012). He is the author of over 100 scientific publications and recipient of the 2014 ECCOMAS young investigator Jacques Louis Lions Award in Computational Mathematics for researchers under the age of 40. Professor Rozza has been an associate editor of the SIAM/ASA Journal of Uncertainty Quantification since 2013, of the SIAM Journal of Numerical Analysis since 2015, and of Computing and Visualization in Science since 2016.

Karsten Urban is a Full Professor of Numerical Mathematics and Director of the Scientific Computing Centre at Ulm University. He is Managing Editor in Chief of Advances in Computational Mathematics and  Associate Editor of several mathematical journals, including SIAM Journal on Scientific  Computing. Further, he is currently directing several interdisciplinary research projects.