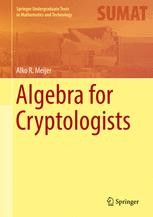 Modern cryptology has been described as the science of the integrity of information, covering all aspects like confidentiality, authenticity and non-repudiation and also including the protocols required for achieving these aims. In both theory and practice it requires notions and constructions from three major disciplines: computer science, electronic engineering and mathematics. Within mathematics, group theory, the theory of finite fields, and elementary number theory as well as some topics not normally covered in courses in algebra, such as the theory of Boolean functions and Shannon theory, are involved.

Although essentially self-contained, a degree of mathematical maturity on the part of the reader is assumed, corresponding to his or her background in computer science or engineering. Algebra for Cryptologists is a textbook for an introductory course in cryptography or an upper undergraduate course in algebra, or for self-study in preparation for postgraduate study in cryptology.
Show all
About the authors

Alko R. Meijer spent some 30 years in academia, including 18 years as professor in the Department of Mathematics and Applied Mathematics at the University of Natal, gradually moving from pure Algebra into its applications, before eventually entering the field of cryptology as a full-time occupation. He is currently a director of Ciphertec c.c. which provides consultation services on communication and data storage security, including in-house courses in cryptology for industry. He has served a term of office as president of the South African Mathematical Society and has represented South Africa at international standards committee meetings dealing with cryptology.

“Cryptography is technically synonymous with information security. Providing security features for data and information is the most important concern in a business requirement. … this book provides rich mathematical treatment of cryptographic algorithms in a simplified way. … This book presents nice and valuable material for students, researchers, and practitioners working in the field of information security.” (S. Ramakrishnan, Computing Reviews, March, 2017)

“The present book consolidates the mathematics these students need to know into a single volume and will help them greatly. Initially, this reviewer believed that the book would be mostly redundant for mathematics majors, but as he read further, he found that it could serve as a valuable supplement within a math course. … Summing Up: Highly recommended. Upper-division undergraduates and above; faculty and professionals.” (C. Bauer, Choice, Vol. 54 (7), March, 2017)

“This book introduces the basic algebra used in modern cryptology. It is mainly addressed to computer scientists and engineers entering the field of mathematical cryptology, but it may also be used as an introduction to algebra and elementary number theory with emphasis on application in cryptology for undergraduate students in computer science, engineering and also mathematics. The book is easily accessible, enjoyable to read, and essentially self-contained.” (Wilfried Meidl, zbMATH 1364.94005, 2017)

“First, the text also covers number theory and also introduces information theory and coding theory. This material is of course algebraic in nature, but does go beyond what one typically expects to see in a book … that is advertised as a text in algebra. Second, the book not only discusses these topics but actually shows how they are used in the study of cryptography. … this book might definitely have some appeal as a prospective text.” (Mark Hunacek, MAA Reviews, December, 2016)