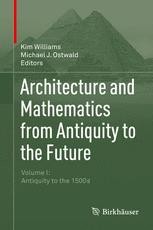 Architecture and Mathematics from Antiquity to the Future

Every age and every culture has relied on the incorporation of mathematics in their works of architecture to imbue the built environment with meaning and order. Mathematics is also central to the production of architecture, to its methods of measurement, fabrication and analysis. This two-volume edited collection presents a detailed portrait of the ways in which two seemingly different disciplines are interconnected. Over almost 100 chapters it illustrates and examines the relationship between architecture and mathematics. Contributors of these chapters come from a wide range of disciplines and backgrounds: architects, mathematicians, historians, theoreticians, scientists and educators. Through this work, architecture may be seen and understood in a new light, by professionals as well as non-professionals.

Volume I covers architecture from antiquity through Egyptian, Mayan, Greek, Roman, Medieval, Inkan, Gothic and early Renaissance eras and styles. The themes that are covered range from symbolism and proportion to measurement and structural stability. From Europe to Africa, Asia and South America, the chapters span different countries, cultures and practices.
Show all
Reviews

“It presents several alternative historical and theoretical contexts of the relationship between architecture and mathematics which has been pushed to the foreground during the past decades with the increasing use of computer-aided design in their profession … . Historians of mathematics, too, will no doubt find useful material here for their research, especially if they are interested in the more practical concerns that have shaped the development of their field … .” (Yelda Nasifoglu, BSHM Bulletin, Vol. 31 (3), October, 2016)

“The study of connections between mathematics and the arts has grown considerably in recent decades, influenced by the work of Doris Schattschneider, Jay Kappraff, and Michele Emmer, among others. The use of mathematics is particularly a necessity in architecture, so the present set is welcome. … This is a valuable resource for mathematics, architecture, and the arts in general. Summing Up: Highly recommended. All readers.” (C. A. Gorini, Choice, Vol. 53 (2), October, 2015)

“The ambitious goal is to describe both the intimate relation but also the alienation between mathematics and architecture and between mathematicians and architects. … It is an important and highly inspiring collection of papers that will be of interest to researchers from as many disciplines as illustrated by the diversity of the background of the authors. … Highly recommended for readers who do not want to drown or hide in their own abyss of specialization.” (Adhemar Bultheel, euro-math-soc.eu, June, 2015)