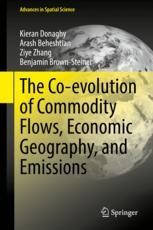 The Co-evolution of Commodity Flows, Economic Geography, and Emissions

This book presents extensions to current commodity-flow models to analyze the economic and environmental impacts of recent structural changes, such as fragmentation of production and lengthening supply chains. The extensions enable augmented commodity-flow models to analyze the vulnerability of supply chains and regions to climate change and extreme weather events. The models allow the explicit treatment of trade in intermediate goods; the so-called “new economic geography” behavioral foundations for production and inter-industry and interregional trade; endogenous determination of capital investment and employment; and changes in emissions associated with production, consumption and freight movement. Presenting a modeling framework and simulations that are based on a thirty-year, spatial time-series of inter-industry and interstate trade in the US, this unique book is a valuable resource for regional scientists, economic geographers and transportation modelers, as well as environmental and atmospheric scientists.

Kieran Donaghy is a Professor Emeritus of City and Regional Planning at Cornell University and is a Fellow of the RSAI.  He holds a Ph.D. in the field of Regional Science from Cornell. [text deleted] Much of Professor Donaghy’s recent research has been focused on the effects of globalization on economic geography and the challenges of adapting to climate change and rebuilding the built environment.  His research has been funded in part by the U.S. Environmental Protection Agency and the U.S. National Science Foundation. Professor Donaghy served as Executive Director of the Regional Science Association International (1997-2003), chaired the Department of City and Regional Planning at Cornell (2008-2014, 2016-2017), and has been a consultant to the World Bank, the European Commission, the U.S. Army Environmental Policy Institute, the Delaware Department of Transportation, and other state and local agencies.

Arash Beheshtian is the founder of Altum Group Advisors.  He holds an undergraduate degree in Civil Engineering, graduate degrees in Urban Planning, Transportation Engineering, Transportation Systems Engineering, and a Ph.D. in City and Regional Planning.  Prior to founding his consultancy, he was a Postdoctoral Research Associate in the Department of City and Regional Planning and the Cornell Program in Infrastructure Policy at Cornell University.  His research has focused on interdependent critical infrastructure, infrastructure well-being in the face of climatic hazards, and transition planning toward resilient infrastructure of energy. Accordingly, he has a track record of publication in such journals as Transportation Research Part A, Transportation Research Part E, Journal of Green Building, Journal of Cleaner Production, International Journal of Disaster Risk Reduction, and The Lancet. He is a co-author of Energy Science and Technology book, Vol. 10: Energy Management. He also presented over 25 peer-reviewed conference articles. Arash Beheshtian is an Adjunct Professor at Columbia University and a member of the Critical Transportation Infrastructure Protection Committee, National Research Council of the U.S.

Ziye Zhang is a Postdoctoral Research Asociate at the Paul and Marcia Wythes Center on Contemporary China.  He holds a PhD in Regional Science from Cornell University. He is interested in urban and regional economics, applied econometrics, and spatial analysis. His current studies focus on consumer behavior in housing markets and incorporate recent micro-behavioral insights into housing choice to improve the understanding of market mechanisms and outcomes. His work also involves methodological developments in regional science and applied econometrics. Before coming to Cornell, Ziye received his master’s degree in Regional Economics and bachelor’s degree in Public Policy from Peking University in China.

Benjamin Brown-Steiner is a Scientist at Atmospheric and Environmental Research (AER), and has nearly 10 years of experience in the atmospheric sciences. His research interests include atmospheric chemistry, emissions, meteorology, and climatology with a focus on uncertainty quantification, model complexity, and the impact of variability. At Cornell University he studied the influence of Asian emissions on air quality within the United States and uncertainties associated with the selection of model parameters. He also worked with an interdisciplinary team of scientists and economists to develop a Black Carbon emissions inventory for trucks and trains. As MIT, he studied the variability of surface ozone and the uncertainties associated with identifying signals based on the selection of spatial and temporal scales. He also compared chemical mechanisms of different complexities and developed strategies for using simplified chemical mechanisms. At AER, he is working on emissions inventory development and supports a variety of projects, including testing and updating chemical mechanisms and studying the impact of biomass burning on US air quality.