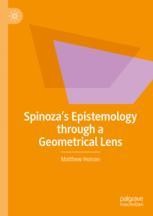 Spinoza’s Epistemology through a Geometrical Lens

This book interrogates the ontology of mathematical entities in Spinoza as a basis for addressing a wide range of interpretive issues in Spinoza’s epistemology—from his antiskepticism and philosophy of science to the nature and scope of reason and intuitive knowledge and the intellectual love of God. Going against recent trends in Spinoza scholarship, and drawing on various sources, including Spinoza’s engagements with optical theory and physics, Matthew Homan argues for a realist interpretation of geometrical figures in Spinoza; illustrates their role in a Spinozan hypothetico-deductive scientific method; and develops Spinoza’s mathematical examples to better illuminate the three kinds of knowledge. The result is a portrait of Spinoza’s epistemology as sanguine and distinctive yet at home in the new Cartesian and Galilean scientific-philosophical paradigm.

“Spinoza's Epistemology through a Geometrical Lens is a thrilling and distinctive study of Spinoza's epistemology. It's also a major study of Spinoza's relationship to the unfolding scientific revolution. In particular, Homan reopens and deepens the debate over Spinoza's ambivalent relationship to mathematization of nature by the mathematical sciences. In so doing he offers an elegant re-reading of Spinoza as a systematic philosopher. Homan's book will be of great interest to Spinozists and scholars of early modern philosophy, historians of science, philosophers of mathematics and epistemologists, especially those interested in affective ways of knowing.” (Eric Schliesser, Professor of Political Science, University of Amsterdam, Netherlands)

“Matthew Homan has convinced me to reconsider my frequent exhortation against reading Spinoza as a Cartesian. Homan peels back thick and complicated layers in Spinoza's understanding and use of mathematical properties and geometric figures in science to reveal deep insights and controversial interpretations of Spinoza’s epistemology and important connections and even bridges to his metaphysical project. Spinoza’s Epistemology through a Geometrical Lens contributes to and even redirects many important ongoing discussions in scholarship on Spinoza.” (Christopher Martin, Associate Professor of Philosophy, University of Toledo, USA)

“Each chapter of Spinoza’s Epistemology through a Geometrical Lens makes an important contribution to our understanding of Spinoza’s philosophy. Homan develops a fascinating interpretation of Spinoza’s views about the ontology of mathematics, which he applies in surprising and insightful ways to address a range of difficult interpretive and philosophical problems. The overarching picture is inspiring. Homan’s Spinoza is a metaphysical realist, an optimist about the limits of human knowledge, and a friend to scientific inquiry.” (John Grey, Department of Philosophy, Michigan State University, USA)