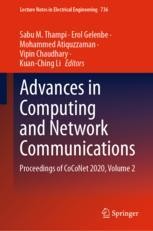 Advances in Computing and Network Communications

This book constitutes the thoroughly refereed post-conference proceedings of the 4th International Conference on Computing and Network Communications (CoCoNet'20), October 14–17, 2020, Chennai, India. The papers presented were carefully reviewed and selected from several initial submissions. The papers are organized in topical sections on Signal, Image and Speech Processing, Wireless and Mobile Communication, Internet of Things, Cloud and Edge Computing, Distributed Systems, Machine Intelligence, Data Analytics, Cybersecurity, Artificial Intelligence and Cognitive Computing and Circuits and Systems. The book is directed to the researchers and scientists engaged in various fields of computing and network communication domains.

Sabu M. Thampi is Professor at the Indian Institute of Information Technology and Management-Kerala (IIITM-K), Technopark Campus, Trivandrum, India. His current research interests include cognitive computing, Internet of Things (IoT), authorship analysis, trust management, biometrics, social networks, nature-inspired computing and video surveillance. He has published papers in book chapters, journals and conference proceedings. He has authored and edited a few books. Sabu has served as Guest Editor for special issues in few journals and a program committee member for many international conferences and workshops. He has co-chaired several international workshops and conferences. He has initiated and is also involved in the organization of several annual conferences/symposiums. Sabu is currently serving as Editor for Elsevier Journal of Network and Computer Applications (JNCA), Connection Science, Taylor Francis, Associate Editor for IEEE Access and International Journal of Embedded Systems, Inderscience, UK, and Reviewer for several reputed international journals. Sabu is a senior member of IEEE and ACM. He is Founding Chair of ACM Trivandrum Professional Chapter.

Erol Gelenbe is a Turkish-French computer scientist, electronic engineer and applied mathematician who is professor in Computer-Communications at Imperial College. Known for pioneering the field of modelling and performance evaluation of computer systems and networks throughout Europe, he invented the random neural network and the eponymous G-networks. His many awards include the ACM SIGMETRICS Life-Time Achievement Award, and the in Memoriam Dennis Gabor Award of the Hungarian Academy of Sciences. Working as a foreigner everywhere, Gelenbe was born in Istanbul in 1945, to Yusuf Ali Gelenbe, a descendant of the 18th-century Ottoman mathematician Gelenbevi Ismail Efendi, and to Maria Sacchet Gelenbe from Cesiomaggiore, Belluno, Italy. After a childhood spent in Istanbul and Alexandria (Egypt), He graduated from Ankara Koleji in 1962 and the Middle East Technical University in 1966, winning the K.K. Clarke Research Award for work on "partial flux switching magnetic memory systems". Awarded a Fulbright Fellowship, he continued his studies at Polytechnic University, where he completed a master's degree and a PhD thesis on "Stochastic automata with structural restrictions", under the supervision of Edward J. Smith. After graduation he joined the University of Michigan as an assistant professor. In 1972, and then on leave from Michigan, he founded the Modeling and Performance Evaluation of Computer Systems research group at INRIA (France), and was a visiting lecturer at the University of Paris 13 University. In 1971 he was elected to the second chair in Computer Science at the University of Liège, where he joined Professor Danny Ribbens in 1973, while remaining a research director at INRIA. In 1973, he was awarded a Doctorat d'État ès Sciences Mathématiques from the Paris VI University with a thesis on "Modèlisation des systèmes informatiques", under Jacques-Louis Lions. He remained a close friend of Professor Ribbens and of the University of Liège, and in 1979, he moved to the Paris-Sud 11 University, where he co-founded the Laboratoire de Recherche en Informatique and its PhD Program, before joining Paris Descartes University in 1986 to found the Ecole des Hautes Etudes en Informatique.Gelenbe became New Jersey State Endowed Professor at the New Jersey Institute of Technology from 1991 to 1993, and from 1993 and 1998 he was chaired professor and head of Electrical and Computer Engineering at Duke University. From 1998 to 2003 at the University of Central Florida, he founded the Department (School) of Electrical Engineering and Computer Science and developed the Harris Corporation Engineering Centre. In 2003, Gelenbe joined Imperial College London as Dennis Gabor Professor in Computer and Communication Networks and Head of Intelligent Systems and Networks. In 2016 he joined Institute of Theoretical and Applied Informatics, Polish Academy of Sciences, Gliwice Poland.

Gelenbe has contributed pioneering research concerning the performance of multiprogramming computer systems, virtual memory management, data base reliability optimisation, distributed systems and network protocols. He formed, led, and trained the team that designed the commercial QNAP Computer and Network Performance Modeling Tool. He introduced the Flexsim Object Oriented approach for the simulation in manufacturing systems. He carried out some of the first work on adaptive control of computer systems, and published seminal papers on the performance optimisation of computer network protocols and on the use of diffusion approximations for network performance. He developed new product form queueing networks with negative customers and triggers known as G-networks. He also introduced a new spiked stochastic neural network model known as the random neural network, developed its mathematical solution and learning algorithms, and applied it to both engineering and biological problems. His inventions include the design of the first random access fibre-optics local area network, a patented admission control technique for ATM networks, a neural network based anomaly detector for brain magnetic resonance scans, and the cognitive packet network routing protocol to offer quality of service to users. From 1984 to 1986 he served as the Science and Technology Advisor to the French Secretary of State for Universities. He founded the ISCIS (International Symposium on Computer and Information Sciences) series of conferences that since 1986 are held annually in Turkey, the USA and Europe to bring together Turkish computer scientists with their international counterparts. According to the Mathematics Genealogy project, Gelenbe has graduated over 72 PhD students, placing him in the Top50 worldwide – all time – PhD supervisors in the mathematical sciences.


Mohammed Atiquzzaman (senior member, IEEE) obtained his M.S. and Ph.D. in Electrical Engineering and Electronics from the University of Manchester (UK) in 1984 and 1987, respectively. He currently holds the Edith J Kinney Gaylord Presidential professorship in the School of Computer Science at the University of Oklahoma. Dr. Atiquzzaman is Editor-in-Chief of Journal of Networks and Computer Applications and Founding Editor-in-Chief of Vehicular Communications and serves/served on the editorial boards of many journals including IEEE Communications Magazine, Real Time Imaging Journal, International Journal of Communication Networks and Distributed Systems and Journal of Sensor Networks and International Journal of Communication Systems. He co-chaired the IEEE High Performance Switching and Routing Symposium (2003, 2011), IEEE GLOBECOM and ICC (2014, 2012, 2010, 2009, 2007, 2006), IEEE VTC (2013) and the SPIE Quality of Service over Next-Generation Data Networks Conferences (2001, 2002, 2003). He was Panel Co-Chair of INFOCOM’05, is/has been in the program committee of many conferences such as INFOCOM, GLOBECOM, ICCCN, ICCIT and Local Computer Networks and serves on the review panels at the National Science Foundation. He is Current Chair of IEEE Communication Society Technical Committee on Communications Switching and Routing. Dr. Atiquzzaman received IEEE Communication Society's Fred W. Ellersick Prize and NASA Group Achievement Award for “outstanding work to further NASA Glenn Research Center's effort in the area of Advanced Communications/Air Traffic Management's Fiber Optic Signal Distribution for Aeronautical Communications” project. He is Co-Author of the book “Performance of TCP/IP over ATM networks” and has over 270 refereed publications. His current research interests are in areas of transport protocols, wireless and mobile networks, ad hoc networks, satellite networks, power-aware networking and optical communications. His research has been funded by National Science Foundation (NSF), National Aeronautics and Space Administration (NASA), and U.S. Air Force, Cisco and Honeywell.

Vipin Chaudhary is the Kevin J. Kranzusch Professor and Chair of the Department of Computer and Data Sciences at Case Western Reserve University. Most recently, he was a Program Director at the National Science Foundation where he was involved in many national initiatives and the Empire Innovation Professor of Computer Science and Engineering at SUNY Buffalo. He cofounded Scalable Informatics, a leading provider of pragmatic, high performance software-defined storage and compute solutions to a wide range of markets, from financial and scientific computing to research and big data analytics. From 2010 to 2013, Dr. Chaudhary was the Chief Executive Officer of Computational Research Laboratories (CRL), a wholly owned Tata Sons company, where he grew the company globally to be an HPC cloud and solutions leader before selling it to Tata Consulting Services. Prior to this, as Senior Director of Advanced Development at Cradle Technologies, Inc., he was responsible for advanced programming tools for multi-processor chips. He was also the Chief Architect at Corio Inc., which had a successful IPO in July, 2000. Dr. Chaudhary was awarded the prestigious President of India Gold Medal in 1986 at the Indian Institute of Technology (IIT) Kharagpur where he received the B.Tech. (Hons.) degree in Computer Science and Engineering and a Ph.D. degree from The University of Texas at Austin.

Kuan-Ching Li is Professor in the Department of Computer Science and Information Engineering at Providence University, Taiwan. Dr. Li is the recipient of awards from Nvidia, AWS, Intel, Ministry of Education (MOE)/Taiwan and Ministry of Science and Technology (MOST)/Taiwan, as also distinguished chair professorships from universities in China and other countries. He has been involved actively in conferences and workshops as a program/general/steering conference chairman positions and numerous conferences and workshops as a program committee member and has organized numerous conferences related to high-performance computing and computational science & engineering. Dr. Li is Editor-in-Chief of technical publications Connection Science (Taylor & Francis), International Journal of Computational Science and Engineering (Inderscience) and International Journal of Embedded Systems (Inderscience), also serving a number of journal’s editorial boards and guest editorships. In addition, he has been acting as Co-Author and Co-Editor of several technical professional books, published by CRC Press, Springer, McGraw-Hill and IGI Global. His topics of interest include GPU/cloud/edge computing, parallel software design, performance evaluation and benchmarking. Dr. Li is a member of AAAS, a senior member of the IEEE and Fellow of the IET.