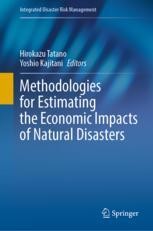 Methodologies for Estimating the Economic Impacts of Natural Disasters

This book outlines methodologies to estimate the economic impacts of natural disasters based on business surveys conducted after large disasters in Japan. By including numerous observations on business activities in past disasters and the validations of both engineering and economic models based on these data sets, this book appeals to practitioners who estimate the regional economic impacts as well as to students and young professionals in various fields who conduct disaster impact studies. The book consists of 7 chapters and includes theories and practices, which help readers to interlink the estimation methods with real-world problems. The study primarily focuses on cases in Japan, but the methods employed can be generalized and applied in other countries.

Dr. Hirokazu Tatano is a professor at the Disaster Prevention Research Institute, Kyoto University, Japan. Since September 2010, he has served as a vice president of the International Society of Integrated Disaster Risk Management (IDRiM). He is also currently the secretary-general of the Global Alliance of Disaster Research Institutes, which was established at the Second Global Summit of Research Institutes for Disaster Risk Reduction, March 19–20, 2015. He received his M.Sc. and Ph.D. in Civil Engineering from Kyoto University. Much of Dr. Tatano's research is on the economics of natural hazards. He led the socioeconomic assessment survey team of the Japan Society of Civil Engineering for the Great East Japan Earthquake in 2011. He also served as a leader of the disaster risk management research field of the Global Center of Excellence (GCOE) Program on Human Security Engineering for Asian Megacities and headed the Mumbai Base, which conducted a research program to implement community-led disaster risk reduction activities. He served as the principal investigator of a research project on disaster risk management strategy of global critical infrastructure, funded by a Ministry of Education, Culture, Sports, Science and Technology, Japan (MEXT) grant-in-aid. Dr. Tatano has done pioneering research on economic consequence analysis. Another major focus of his research has been on resilience to natural disasters at the levels of the individual business, market, and regional economies.

Yoshio Kajitani is a professor in Kagawa University, Japan. He received his Ph.D. in Civil Engineering from Kyoto University in 2004. His thesis was entitled Spatial-Temporal Exposure Assessment and Loss Estimation During Disasters. Previously, Dr. Kajitani had received a bachelor’s degree in civil engineering from Kyoto University in 1997 and a master’s degree in statistics from the University of Western Ontario (now Western University) in 1999. His studies have focused on disaster risk management, especially on the socioeconomic impacts of natural disasters. His academic interests include the applications of statistics, economics and transportation, and utility engineering to the field of disaster prevention, reduction, and recovery. He received the Sir Richard Stone Prize from the International Input–Output Association with Professor Tatano in 2020.