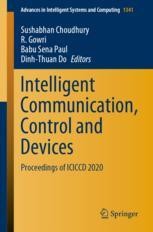 This book focuses on the integration of intelligent communication systems, control systems and devices related to all aspects of engineering and sciences. It includes high-quality research papers from the 4th International Conference on Intelligent Communication, Control and Devices (ICICCD 2020), organized by the Department of Electronics, Instrumentation and Control Engineering at the University of Petroleum and Energy Studies, Dehradun, India during 27–28 November 2020. The topics covered are a range of recent advances in intelligent communication, intelligent control, and intelligent devices.

Dr. Sushabhan Choudhury received his B.E. and M.Tech. from NIT Silchar and Tezpur University, respectively, and Ph.D. degree from UPES, Dehradun. He has rich teaching and industry experience. His research interest includes wireless sensor networks, embedded system, robotics, automation and control, IoT (Node-MCU, ESP8266), nanotechnology, artificial intelligence and machine learning. He has published more than 50 research articles in international/national journals and conferences. He has filed 13 patents and authored several books. He is selected as an outstanding scientist of the twenty-first century by Cambridge Biographical Centre. He is presently working as Professor and Head of the Department of Electrical and Electronics Engineering, School of Engineering UPES.

Dr. R. Gowri received her M.Sc. and M.Tech. from Madurai Kamraj University and Delhi University in 1995 and 1998, respectively, and doctoral in 2005. She has been associated with academics and industries as Design Engineer for the past 22 years since 1998. She has the passion to work in the field of designing microwave passive and active components, communication and antenna designs. She has published around 40 publications in international/national journals and conferences and 4 books. She is a member of IEEE (MTT, APS) and a member of IETE. She has successfully completed five research projects funded by ISRO and DRDO. Prior to joining UPES, she got experience in both academic and administration in various capacities as Dean/Director and HOD in Graphic Era University, Dehradun. She has been continuously guiding scholars at various levels.

Dr. Babu Sena Paul received his B.Tech. and M.Tech. degree in Radio Physics and Electronics from the University of Calcutta, West Bengal, India, in 1999 and 2003, respectively. He was with Philips India Ltd from 1999 to 2000. From 2000 to 2002, he served as Lecturer of Electronics and Communication Engineering Department at SMIT, Sikkim, India. He received his Ph.D. degree from the Department of Electronics and Communication Engineering, Indian Institute of Technology Guwahati India. He has attended and published over sixty research papers in international and national conferences, symposiums and peer-reviewed journals. He has successfully supervised several postgraduate students and postdoctoral research fellows. He joined the University of Johannesburg in 2010. He has served as Head of the Department at the Department of Electrical and Electronic Engineering Technology, University of Johannesburg, from April 2015 to March 2018. He is currently serving as Associate Professor and Director to the Institute for Intelligent Systems, University of Johannesburg. He was awarded the IETE Research Fellowship. He is a life member of IETE and a member of IEEE.

Dinh-Thuan Do (a member, IEEE) received the B.S., M.Eng. and Ph.D. degrees from Vietnam National University (VNU-HCMC), in 2003, 2007, and 2013, respectively, all in communications engineering. He was Visiting Ph.D. Student with the Communications Engineering Institute, National Tsing Hua University, Taiwan, from 2009 to 2010. Prior to joining Ton Duc Thang University, he was Senior Engineer with Vina Phone Mobile Network, from 2003 to 2009. His publications include over 60 SCIE/SCI-indexed journal articles, over 45 SCOPUS-indexed journal articles and over 50 international conference papers. He is the sole author of one textbook and one book chapter. His research interests include signal processing in wireless communications networks, NOMA, full-duplex transmission and energy harvesting. Dr. Thuan was a recipient of Golden Globe Award from Vietnam Ministry of Science and Technology in 2015 (Top 10 most excellent scientist nationwide). He is currently serving as Editor of Computer Communications (Elsevier), Associate Editor of EURASIP Journal on Wireless Communications and Networking (Springer) and Editor of KSII Transactions on Internet and Information Systems.