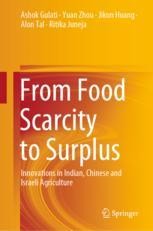 From Food Scarcity to Surplus

This book brings together unique experiences of India, China and Israel in overcoming economic, social, and natural resource challenges. Through its eleven chapters, the book captures the role of groundbreaking innovations in achieving unprecedented agricultural growth and stabilizing these nations. It provides a future outlook of the new challenges that will confront these countries in 2030 and beyond, related to tackling food and nutrition security, sustainable agricultural growth and adhering to improved food safety standards. This book provides useful insights for exploring technological innovations and policies that can address these future challenges and develop profitable and sustainable agriculture. This volume also highlights valuable lessons that India, China and Israel provide for the rest of the developing world where population is growing fast; natural resources are limited; and it is a challenge to produce enough food, feed and fibre for their populations. Tracing the historical past, this book is an impressive resource for academicians, policymakers, practitioners, agribusiness players, entrepreneurs in understanding the role of innovations in addressing future challenges.

Ashok Gulati is Infosys Chair Professor for Agriculture at the Indian Council for Research on International Economic Relations (ICRIER) since March 2014. He is currently also on the Central Board of Directors of the Reserve Bank of India (RBI), National Bank for Agriculture and Rural Development (NABARD), and National Commodities and Derivates Exchange (NCDEX). He was Chairman of the Commission for Agricultural Costs and Prices (CACP), Government of India (2011-14); Director (Markets, Trade and Institutions, and later in Asia) at the International Food Policy Research Institute (IFPRI) (2001-11).

Yuan Zhou is Head of Agricultural Policy and China Program at the Syngenta Foundation for Sustainable Agriculture, headquartered in Basel, Switzerland. She has been advising the Foundation and its partners on policy development since 2009, covering topics of agricultural and food policy, regional economic integration, seed policy, food safety and quality, agricultural extension, youth entrepreneurship, and climate-smart and resilient agriculture. Dr. Zhou served as the President of the Swiss Forum for International Agricultural Research (SFIAR) from 2017 to 2019.

Alon Tal's career has been a balance between academia and public interest advocacy. He is presently chair of the Department of Public Policy at Tel Aviv University and was a visiting professor at the University of Otago in New Zealand Stanford University and Michigan State University. Between 2004 and 2016, Tal was a member of the international board of directors of the Jewish National Fund where he served as chairman of the committee for land development.  From 1990 until 2000 Tal was a member of Kibbutz Ketura, a collective agricultural settlement in the south of Israel.

Ritika Juneja is a consultant at ICRIER since 2017. She specialises in various aspects of Indian agriculture, ranging from agri-innovations to revolutions, agri-credit, farm mechanization, structural transformation, etc. Before joining ICRIER, she worked with the Quality Council of India (Government of India) to assess and evaluate government initiatives such as Swachh Bharat (Clean India) Mission, Public Grievance Redressal, and Citizens' Charter. She was also deputed to the Department of Administrative Reforms and Public Grievances to provide analytical support for administrative reforms across central government ministries. She is a post graduate (Gold medallist) from Amity University in India.