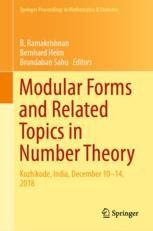 This book collects the papers presented at the Conference on Number Theory, held at the Kerala School of Mathematics, Kozhikode, Kerala, India, from December 10–14, 2018. The conference aimed at bringing the active number theorists and researchers in automorphic forms and allied areas to demonstrate their current research works. This book benefits young research scholars, postdoctoral fellows, and young faculty members working in these areas of research.

BERNHARD HEIM is Dean of Faculty of Science and Head of the Department Mathematics and Science, German University of Technology, Oman. He received his Ph.D. degree from the University of Mannheim, Germany, and was a postdoc at the Max Planck Institute for Mathematics, Bonn, Germany.
B. RAMAKRISHNAN is Professor at the Department of Statistics and Applied Mathematics, Central University of Tamil Nadu, and is on lien from the Harish-Chandra Research Institute (HRI), Prayagraj, India. He completed his Ph.D. from Ramakrishna Mission Vivekananda College, Chennai, under the supervision of Prof. T.C. Vasudevan. He joined HRI (formerly known as Mehta Research Institute), Prayagraj, in April 1993. Earlier, he served HRI as Dean of Administration (2005–2009) and Dean of Academics (2015–2018). He was also Treasurer of the National Academy of Sciences, Prayagraj, from 2016–2019. His areas of research are automorphic forms, theory of modular forms of integral and half-integral weights, higher degree modular forms, Jacobi forms, and so on. Professor Ramakrishnan has guided several Ph.D. students, and his research papers have been published in several international journals of repute.

BRUNDABAN SAHU is Associate Professor at the School of Mathematical Sciences, National Institute of Science Education and Research, Bhubaneswar, India. He completed his Ph.D. in Mathematics from the Harish-Chandra Research Institute in 2008 with the thesis titled “Some Problems in Number Theory” under Prof. B. Ramakrishnan. He was postdoctoral fellow at the Science Foundation of Ireland (SFI), University College Dublin, during November 2008–October 2010, under Prof. Dr. Robert Osburn. His areas of research include number theory, modular forms, and Jacobi forms. Dr. Sahu’s research papers have been published in various journals of repute.