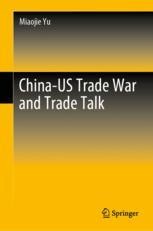 This book focuses on the current tension between China and the US on trade imbalance and discusses China’s opening-up strategy in the context of this trade conflict. The book is divided into two parts. In the first part, the author presents a detailed analysis of the current state of the China-US trade relationship and describes the potential impacts of China-US trade conflicts. The topics covered in this section include the re-estimate of US trade deficit with China, China’s non-market economy status, the impact of China-US bilateral investment treaties on China’s manufacturing sectors, and the estimated welfare losses and gains resulting from the China-US trade war. Part II explores China’s possible response and development strategy in the context of de-globalization. Based on an overview of China’s three stages of economic reform and opening-up policy in the past four decades, the author discusses the future tasks that would move the country into a new stage of all-round opening up. Lastly, the book comprehensively reviews the role of processing trade, trade liberalization, and firm performance in promoting China’s miraculous economic growth so as to foster a better understanding of China’s experience of opening up over the past 4 decades.

Professor Miaojie Yu is University Liberal-Art Chair Professor and Deputy Dean of National School of Development (NSD), Peking University. He is a Chang-Jiang Scholar of Ministry of Education of China, and is awarded as China’s National Science Fund for Distinguished Young Scholars. Professor Yu’s research includes international trade and Chinese economy. He has published more than 100 peer-reviewed papers and 10 books in English and Chinese, and won the prize of Royal Economic Society (2015).

“China’s tremendous growth over the past several decades has greatly expanded its role in the world economy. Neighboring countries in Asia, those in Africa, as well as in Europe and the United States are all tied to China through global production chains. Professor Yu Miaojie provides us with an insightful analysis of how this system has evolved and how it is being challenged by the trade war with the United States. These topics are important to all those interested in the state of the world economy and in what the future might bring.” (Robert C. Feenstra, Distinguished Professor, University of California, Davis)

“Professor Yu has produced a masterful account of the economics underlying the US-China trade conflict. Central to the trade tensions are asymmetric flows of trade and capital between the countries. This timely book unpacks these flows and provides a thorough analysis of how these imbalances arose and how an unsuccessful resolution of the conflict would affect China, the US and the rest of the world. It is essential reading for those who want to understand the origins and possible future directions of the trade war.” (Gordon Hanson, Peter Wertheim Professor, Harvard University)

“This objective and authoritative study of current US-China trade conflict is a must read for anyone who wants to understand the roots and likely evolutions of one of the most important issues in our time.” (Justin Yifu Lin, Chair Professor, Peking University; Former Chief Economist, the World Bank)

“With tempers flaring on both sides of the Pacific and a China-US trade war rearing its ugly head, it is time to step beyond the rhetoric and listen to the voices of reason. Professor Yu is one of those rare voices. Trained in the United States and senior faculty at China’s premier Peking University, he has established himself as China’s leading authority on international trade and the current China-US trade war. In a series of essays, he puts the current trade war in context and provides a way past the rhetoric and towards dialogue.” (Daniel Trefler, J. Douglas & Ruth Grant Chair Professor, University of Toronto)

“This is the book on China trade that every China-watcher and every trade economist keeps on her book shelf.  The book not only gives a comprehensive analytical account of China’s transformation from an autarkic economy to a major world trader, it also covers the still-ongoing US-China trade war and the ambitious Belt-Road Initiative, and speculates insightfully on the internationalization of the RMB. A first-class book by a first-class economist.” (Wing Thye Woo, Distinguished Professor, University of California, Davis & Research Professor, Sunway University, Kuala Lumpur)