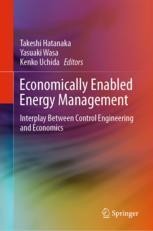 Interplay Between Control Engineering and Economics

Takeshi Hatanaka received his B.Eng. degree in informatics and mathematical science, and his M.Inf. and Ph.D. degrees in applied mathematics and physics, from Kyoto University, Japan, in 2002, 2004 and 2007, respectively. He joined Tokyo Institute of Technology in 2007, where he held positions as an assistant and associate professor. In 2016, he spent an eight-month sabbatical at the School of Engineering and Applied Sciences, Harvard University. Since April 2018, he has been an Associate Professor at Osaka University. His research interests include energy management systems and networked robotics. He received the Outstanding Paper Award (2009, 2015), Pioneer Award (2014), Outstanding Book Award (2016), Kimura Award (2017), and Control Division Conference Award (2018), all from the SICE. He is an associate editor for the journals IEEE TSCT and SICE JCMSI, and a member of the Conference Editorial Board of IEEE CSS. He is the coauthor of Passivity-Based Control and Estimation in Networked Robotics (Springer, 2015).
Yasuaki Wasa is currently an assistant professor of Electrical Engineering and Bioscience, Waseda University, Japan, since April 2019. He received his B.Eng. degree in control and systems engineering, and his M.Eng. and Ph.D. degrees in mechanical and control engineering, from Tokyo Institute of Technology, Japan in 2011, 2013 and 2016, respectively. He was a research fellow of the Japan Society for the Promotion of Science from 2014 to 2017, and a junior researcher at Waseda University from 2017 to 2019. His research interests include dynamic incentive design in energy management systems, and game theoretic distributed learning and optimization for cyber-physical & human systems. He received the Hatakeyama Award (2012) and Miura Award (2014) from the JSME, the Outstanding Paper Award (2015) and the Young Author Award (2019) from the SICE. He was also a recipient of Asian Control Conference 2019 Best Paper Award Finalist.
Kenko Uchida graduated from Waseda University, Tokyo, Japan, in 1971, and obtained his M.S. and Dr.Eng. degrees from Waseda University in 1973 and 1976, respectively. He is currently a Senior Research Professor of Research Institute for Science and Engineering at Waseda University. He was an Alexander von Humboldt research fellow at the Technical University of Munich from 1982 to 1983. His main research interests are in the information structure of optimal control and dynamic games, and control problems in energy management systems and biomedical systems. He has served as an associate editor for the journals Automatica and Asian Journal of Control. He received the Outstanding Paper Award in 2010 from the SICE. He is a fellow member of the SICE, and was a vice president of the Asian Control Association from 2012 to 2013 and an associate member of the Science Council of Japan from 2008 to 2017.