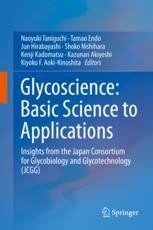 Insights from the Japan Consortium for Glycobiology and Glycotechnology (JCGG)

This book presents the state of the art in glycoscience and proposes a road map for the coming decade, focusing on the potential of glycoscience research to shed light on important basic science issues and give rise to exciting new applications, especially in the field of diagnosis and therapeutics. Individual sections offer in-depth coverage of various topics relating to glycans and biopharmaceuticals, glycans in medical science and medicine, glycan technologies, glycans in food and nutrients, and glycan-related materials and their uses. In addition, the book presents an exemplary training course on glycomics and highlights educational and analytical web resources, and also includes glossaries and boxes summarizing key facts to ensure ease of understanding for non-expert readers and students. Written by more than 150 active participants in the Japan Consortium for Glycobiology and Glycotechnology (JCGG), whose goal is to promote the development of interdisciplinary glycoscience and establish a global network in the field, it is a valuable resource for students, postdocs, and researchers in the life sciences as well as for stakeholders and professionals in government, funding agencies and industry.

Tamao Endo graduated from the Faculty of Pharmaceutical Sciences. He was a postdoctoral fellow at the Baylor College of Medicine, and a research associate in the Institute of Medical Science, the University of Tokyo. Then, he has been the head of Department of Molecular Glycobiology, Tokyo Metropolitan Institute of Gerontology (TMIG), and served the vice-director of TMIG. He served as the president of The Japanese Society of Carbohydrate Research (JSCR) and does as Japan Consortium for Glycobiology and Glycotechnology (JCGG). He is a member of the Science Council of Japan. He is now focusing on glycobiology on aging and diseases.

Jun Hirabayashi graduated from Tohoku University and became an assistant professor of Faculty of Pharmaceutical Sciences, Teikyo University, Sagamiko, Japan where he began basic studies on animal lectins now known as galectins. After working there for years, he moved to National Institute of Advanced Industrial Science and Technology, Tsukuba, Japan to work for industrialization of the developed technologiesm, such as frontal affinity chromatography and lectin microarray. He is also a visiting professor of Kagawa University and a member of the Kagawa Rare Sugar Project. His main research fields are biochemistry, glycoscience, glycotechnology and lectin engineering.

Shoko Nishihara received her Ph.D. (Chemistry, Science) from the University of Tokyo. She continued her research as a research associate at Department of Microbiology, the Jikei University School of Medicine. Then she worked on Drosophila development as a postdoctoral fellow at Department of Biochemistry, University of North Carolina and in Mitsubishi Kasei Institute of Life Sciences. She moved as an assistant professor to Soka University and was introduced to the field of glycobiology. She is a Professor at Department of Bioinformatics, Graduate School of Engineering, Soka University and a member of the Editorial Board of the Glycoconjugate Journal. She is focusing on glycobiolgy in stem cells and Drosophila development.

Kenji Kadomatsu graduated from Kyushu University Faculty of Medicine and received PhD from the same university. He held research, academic and clinical appointments in Fukuoka, Kagoshima, U.S.A. and Nagoya, publishing on biochemistry, cancer, and neuroscience. He is past-representative of Asia/Australia/Africa region of Advance in Neuroblastoma Research Association and currently Editor-in-Chief of Journal of Biochemistry. He serves as Dean and Professor of Biochemistry in Nagoya University Graduate School of Medicine, and holds honorary professorship of Chinese University of Hong Kong.

Kazunari Akiyoshi graduated from the Faculty of Engineering in Kyushu University. After postdoctoral research at Purdue University (USA), he joined in Nagasaki University and then moved to Kyoto University as an Assistant Professor and was promoted to Associate Professor. He moved to the Institute of Biomaterials and Bioengineering, Tokyo Medical and Dental University as a Professor and was back to Department of Polymer Chemistry at Kyoto University. He was Research Director of ERATO in JST. His scientific interests are focused on bio-inspired systems for biotechnology and medicine such as drug delivery system and tissue engineering.

Dr. Kiyoko F. Aoki-Kinoshita obtained her PhD in Computer Engineering from Northwestern University.  After working as a software engineer, she became a researcher at the Bioinformatics Center in the Institute for Chemical Research at Kyoto University.  Later, she moved to Soka University, where she is now a full professor.  She is on the board of several carbohydrate research societies. Her research interests are in glycome informatics, and she has developed numerous software tools and databases to support glycobiology research, including the RINGS resource for glycan structure analysis and data mining, the glycan repository GlyTouCan, and now the GlyCosmos Portal.