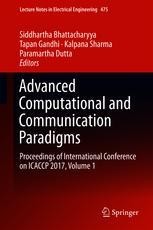 ICACCP 2017 covers an advanced computational paradigms and communications technique which provides failsafe and robust solutions to the emerging problems faced by mankind. Technologists, scientists, industry professionals and research scholars from regional, national and international levels are invited to present their original unpublished work in this conference. There were about 550 technical paper submitted. Finally after peer review, 142 high-quality papers have been accepted and registered for oral presentation which held across 09 general sessions and 05 special sessions along with 04 keynote address and 06 invited talks. This volume comprises 65 accepted papers of ICACCP 2017.

Dr. Siddhartha Bhattacharyya [FIETE, SMIEEE, SMACM, SMIETI, LMCSI, LMOSI, LMISTE, MIET (UK), MIAENG, MIRSS, MIAASSE, MCSTA, MIDES, MIISIP] did his Bachelors in Physics, Bachelors in Optics and Optoelectronics and Masters in Optics and Optoelectronics from University of Calcutta, India in 1995, 1998 and 2000 respectively. He completed PhD in Computer Science and Engineering from Jadavpur University, India in 2008. He is the recipient of the University Gold Medal from the University of Calcutta for his Masters. He is the recipient of the coveted Adarsh Vidya Saraswati Rashtriya Puraskar in 2016, Distinguished HoD and Distinguished Professor wards conferred by Computer Society of India, Mumbai Chapter, India in 2017 and Bhartiya Shiksha Ratan Award conferred by Economic Growth Foundation, New Delhi in 2017.  He received the NACF-SCRA, India award for Best Faculty for Research in 2017. He received Honorary Doctorate Award (D. Litt.) from The University of South America in 2017. He is also the recipient of the South East Asia Regional Computing Confederation (SEARCC) International Digital Award ICT Educator of the Year at Colombo, Sri Lanka in 2017. He is currently the Principal of RCC Institute of Information Technology, Kolkata, India. In addition, he is also serving as the Dean (Research and Development and Academic Affairs) of the institute. He is a co-author of 4 books and the co-editor of 8 books and has more than 170 research publications in international journals and conference proceedings to his credit. He has got a patent on intelligent colorimeter technology.

Dr. Tapan K Gandhi is currently working as Assistant Professor in the Department of Electrical Engineering, IIT Delhi and also research affiliate to MIT, USA. He received his Ph.D. fellowship from PROJECT Prakash (MIT, USA) and obtained his Ph.D. from IIT Delhi in Biomedical Engineering. Following his Ph.D., he has spent 3+ years as postdoctoral research scientist at MIT, USA. Dr. Gandhi was also awarded an INSPIRE Faculty in the engineering & technology category of the Department of Science & Technology, Govt. of India. His research expertise spans from computational neuroscience, brain imaging, assistive technology, bio-medical instrumentation, machine learning, cognitive computing to artificial intelligence. He has published papers in top ranking journals like Nature, PNAS, Current Biology, PloS Biology. He has more than 60 publications in International journals and conference proceedings. He is PI & Co-PI of projects from industry as well as Govt. of India organizations. Dr. Kalpana Sharma is currently Professor and Head of Computer Science and Engineering Department at Sikkim Manipal Institute of Technology, Sikkim Manipal University. She has pursued her B.E. from National Institute of Technology, Silchar, M.Tech from Indian Institute of Technology, Khargpur and Ph.D. from Sikkim Manipal University. She has over 19 years of experience in academics. She is currently guiding two research scholars in the allied fields. She has 29 research publications in various national and international journals and conferences. Her area of interest includes security in wireless sensor networks (WSN) and real time systems. She has authored a book in WSN. She has executed many funded projects in the fields related to security in WSN and real time task scheduling. Dr. Paramartha Dutta, born 1966, is B.Stat (Hons.) (ISI, Calcutta), M. Stat (ISI, Calcutta), M. Tech (Computer Science; ISI, Calcutta) and Ph.D. (Engineering; IIEST, Shibpur), SMIEEE, SMACM, SMIACSIT, FIETE, FIE, FOSI, LMISTE, LMIUPRAI, LMISCA having academic experience of about 23 years. He is presently a Professor in the Department of Computer and System Sciences, Visva Bharati University. He has co-authored eight books and has also seven edited book to his credit. He has published more than 200 papers in various journals and conference proceedings, both international and national as well as several book chapters in edited volumes of reputed international publishing house like Elsevier, Springer-Verlag, CRC Press, John Wiley, etc. Dr. Dutta has guided four scholars and is guiding six for their Ph.D. Dr. Dutta has served as guest editor of special volumes of international journals published by publishers such as Elsevier, Springer, etc.
Show all