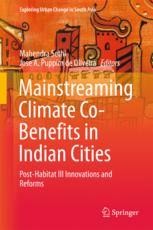 This volume presents a novel framework to understand urban climate co-benefits in India, that is, tackling climate change and achieving sustainable development goals in cities. It utilizes methods and tools from several assessment frameworks to scientifically evaluate sector co-benefits for informed decision making. The co-benefits approach can lead to significant improvements in the way societies use environmental resources and distribute their outputs. The volume discusses four main themes: (1) Concepts and theories on cities and climate co-benefits; (2) Contextualizing co-benefit issues across spatial scales and sectors; (3) Sectoral analyses of co-benefits in energy, transport, buildings, waste, and biodiversity, and (4) Innovations and reforms needed to promote co-benefits in cities. The discussions are based on empirical research conducted in Indian cities and aligned with the international discourse on the 2030 UN Development Agenda and New Urban Agenda created at the UN-Habitat III in 2016. The analyses and recommendations in this volume are of considerable interest to policy experts, scholars and researchers of  urban and regional studies, geography, public policy, international development/law, economics, development planning, environmental planning, climate change, energy studies, and so on.

Dr. Mahendra Sethi is an urban-environment expert and recipient of United Nations University - Institute for the Advanced Study of Sustainability (UNU-IAS) PhD Fellowship at UNU-IAS, Japan. His field of research explores the role of cities at the interface of global environmental change with a particular focus in developing countries. In India, he is associated with the National Institute of Urban Affairs, as Editor of the research journal Urban India. Earlier in his career, he was involved in research studies, development consultancy, appraisals and formulation of urban, regional and environmental plans for national and state governments, statutory bodies, private sector, and multilateral organizations, including the World Bank and WWF. He has keen research interest in themes of megacities, sustainable transport, optimization models, climate resilience, green habitat, evolution of settlements, and ecological development in mountain and hill areas. Sethi is a recipient of Government of India’s Ministry of Human Resource Development Scholarship from 2005-07 and also offered Liverpool University Scholarship in 2005. He has authored numerous publications in peer-reviewed books and journals and regularly disseminates research through national and international conferences. His other title: Climate Change and Cities – A spatial perspective of carbon footprint and beyond (Routledge), is an empirical research into economic development, urbanization and GHG patterns of over 200 countries based on his doctoral thesis.
Dr. Jose A. Puppim de Oliveira is a faculty member at the Getulio Vargas Foundation (FGV/EAESP and FGV/EBAPE) and also teaches at the Federal University of Rio de Janeiro (COPPEAD-UFRJ), Fudan University (Shanghai) and Universidad Andina Simon Bolivar (UASB) in Quito, Ecuador. He is associated researcher at the United Nations University (UNU-IIGH) in Kuala Lumpur and the MIT Joint Program for Science and Policy for Global Change (USA). His research examines patterns of governance, institution building and policy implementation at different levels, looking at how global and national institutions are interlinked to local governance and action, and vice-versa. He held positions of Senior Research Fellow and Assistant Director of UNU-IAS in Japan between 2009 and 2015 where he coordinated the Sustainable Urban Futures research program. In 2015-2016, he was MIT-UTM Visiting Scholar in Malaysia and Cambridge, USA. Previously, he worked as faculty member at the University College London (UK) and the University of Santiago de Compostela (Spain). He has also be an instructor, consultant and researcher for several organizations such as different United Nations agencies, the OECD, the World Bank Institute, sub-national and national governments, and various NGOs and small and large firms in the private sector. He has published ten books and a number of articles in peer-reviewed journals. He is editor-in-chief of the journal Public Administration and Development (PAD, Wiley-Blackwell) and member of several editorial boards such as the Brazilian Review of Contemporanean Administration (RAC), Asian Journal of Political Science and Asia-Pacific Journal of Public Administration (Taylor and Francis). Jose holds a Ph.D. in Planning from the Massachusetts Institute of Technology (MIT), USA.