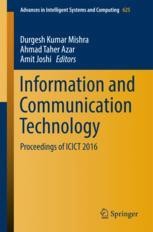 This book volume contains 31 papers presented at ICICT 2016: Second International Congress on Information and Communication Technology. The conference was held during 12-13 December 2016, Bangkok, Thailand and organized communally by G R Foundation, and Computer Society of India Division IV – Communication and Division V – Education and Research. This volume contains papers mainly focused on ICT for computation, algorithms and data analytics, and IT security.

Dr. Durgesh Kumar Mishra has received M.Tech Degree in Computer Science from DAVV, Indore in 1994 and PhD degree in Computer Engineering in 2008. Presently, he is working as a Professor (CSE) and Director, Microsoft Innovation Centre at Shri Aurobindo Institute of Technology, Indore, MP, India. He is also a visiting faculty at IIT-Indore, MP, India. He has 24 years of teaching and 10 years of research experience. He has completed his PhD under the guidance of Late Dr. M. Chandwani on “Secure Multi-Party Computation for Preserving Privacy”. He has published more than 90 papers in refereed international/national journals and conferences including IEEE, ACM conferences. He has organized many conferences like WOCN, CONSEG and CSIBIG in the capacity of conference General Chair and editor of conference proceeding. His publications are listed in DBLP, Citeseer-x, Elsevier and Scopus. He is a Senior Member of IEEE and held many positions like Chairman, IEEE MP-Subsection (2011-2012), and Chairman IEEE Computer Society Bombay Chapter (2009-2010).  Dr. Mishra has also served the largest technical and profession association of India, the Computer Society of India (CSI) by holding positions as Chairman, CSI Indore Chapter, State Student Coordinator- Region III MP, Member-Student Research Board, Core Member-CSI IT Excellence Award Committee. He has been recently elected as Chairman CSI Division IV Communication at National Level (2014-2016).  Dr. Mishra has delivered his tutorials in IEEE International conferences in India as well as abroad. He is also the programme committee member, and reviewer of several international conferences. He visited and delivered his invited talk in Taiwan, Bangladesh, Singapore, Nepal, USA, UK and France. He has authored a book on “Database Management Systems”. He had been Chief Editor of Journal of Technology and Engineering Sciences. He has been also serving as member of Editorial Board of many national and international refereed journals. He has been a consultant to industries and government organizations like sales tax and labour department of government of Madhya Pradesh, India. Recently he has been awarded with “Paper Presenter at International Level” by Computer Society of India. Currently, he is Chairman of Division IV Computer Society of India and Chairman of ACM Chapter covering Rajasthan and MP State

Mr. Amit Joshi is a young entrepreneur and researcher who has completed his graduation (B.Tech ) in Information Technology and M.Tech in Computer Science and Engineering and pursuing his research in the areas of Cloud Computing and Cryptography. He has an experience of around 6 years in academic and industry in prestigious organizations of Udaipur and Ahmedabad. Currently, he is working as an Assistant Professor in Department of Information Technology at Sabar Institute in Gujarat. He is an active member of ACM, CSI, AMIE, IACSIT-Singapore, IDES, ACEEE, NPA and many other professional societies. He is an Honorary Secretary of CSI Udaipur Chapter and Secretary for ACM Udaipur Chapter. He has presented and published more than 30 papers in national and international journals and conferences of IEEE and ACM. He has also edited three books on diversified subjects including Advances in Open Source Mobile Technologies, ICT for Integrated Rural Development and ICT for Competitive Strategies. He has organized more than 15 national and international conferences and workshops including International Conference ICTCS – 2014 at Udaipur through ACM – ICPS. For his contribution towards the society, he has been given Appreciation Award by The Institution of Engineers (India), ULC, on the celebration of Engineers, 15 September 2014 and by SIG-WNs Computer Society of India on the Occasion of ACCE – 2012 on 11 February 2012.