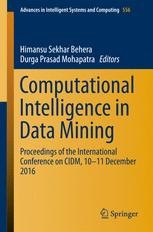 Proceedings of the International Conference on CIDM, 10-11 December 2016

The book presents high quality papers presented at the International Conference on Computational Intelligence in Data Mining (ICCIDM 2016) organized by School of Computer Engineering, Kalinga Institute of Industrial Technology (KIIT), Bhubaneswar, Odisha, India during December 10 – 11, 2016. The book disseminates the knowledge about innovative, active research directions in the field of data mining, machine and computational intelligence, along with current issues and applications of related topics. The volume aims to explicate and address the difficulties and challenges that of seamless integration of the two core disciplines of computer science.

Prof. Himansu Sekhar Behera is working as an Associate Professor in the Department of Computer Sc. Engineering & Information Technology, Veer SurendraSai University of Technology (VSSUT) - An Unitary Technical University, Established by Government of Odisha. He has received M.Tech in Computer Science & Engineering from NIT, Rourkela (formerly R.E.C, Rourkela) and Doctor of Philosophy in Engineering (Ph.D.) from Biju Pattnaik University of Technology (BPUT), Rourkela, Government of Odisha, respectively. He has published more than 100 research papers in various international Journals and Conferences, edited 11 books and is acting as a Member of the Editorial/Reviewer Board of various international journals. He is proficient in the field of Computer Science Engineering and served in the capacity of program chair, tutorial chair and as an advisory member of committees of many national and international conferences. His research interest includes data mining and intelligent computing. He is associated with various educational and research societies like OITS, ISTE, IE, ISTD, CSI, OMS, AIAER, SMIAENG, SMCSTA, etc. He is currently guiding eight Ph.D. scholars.

Prof. Durga Prasad Mohapatra received his Ph.D. from Indian Institute of Technology Kharagpur and is presently serving as Associate Professor in NIT Rourkela, Odisha. His research interests include software engineering, real-time systems, discrete mathematics, and distributed computing. He has published more than 30 research papers in these fields in various international Journals and Conferences. He has received several project grants from DST and UGC, Government of India. He has received the Young Scientist Award for the year 2006 by Orissa Bigyan Academy. He has also received the Prof. K. Arumugam National Award and the Maharashtra State National Award for outstanding research work in Software Engineering for the years 2009 and 2010, respectively from the Indian Society for Technical Education (ISTE), New Delhi. He is going to receive the Bharat Sikshya Ratan Award for significant contribution in academics awarded by the Global Society for Health and Educational Growth, Delhi.