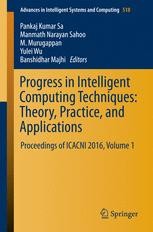 The book focuses on both theory and applications in the broad areas of communication technology, computer science and information security. This two volume book contains the Proceedings of 4th International Conference on Advanced Computing, Networking and Informatics. This book brings together academic scientists, professors, research scholars and students to share and disseminate information on knowledge and scientific research works related to computing, networking, and informatics to discuss the practical challenges encountered and the solutions adopted. The book also promotes translation of basic research into applied investigation and convert applied investigation into practice.

Dr. Pankaj Kumar Sa received the Ph.D. degree in Computer Science in 2010. He is currently serving as an assistant professor with the Department of Computer Science and Engineering, National Institute of Technology Rourkela, India. His research interests include computer vision, biometrics, visual surveillance, and robotic perception. He has co-authored a number of research articles in various journals, conferences, and book chapters. He has co-investigated some research and development projects that are funded by SERB, DRDOPXE, DeitY, and ISRO. He has received several prestigious awards and honors for his excellence in academics and research. Apart from research and teaching, he conceptualizes and engineers the process of institutional automation.

Dr. Manmath Narayan Sahoo is an Assistant Professor in Computer Science and Engineering Department at National Institute of Technology Rourkela, Rourkela, India. His research interest areas are Fault Tolerant Systems, Operating Systems, Distributed Computing, and Networking. He is the member of IEEE, Computer Society of India and The Institutions of Engineers, India. He has published several papers in national and international journals.

Dr. Yulei Wu is a Lecturer in Computer Science at the University of Exeter. He received his PhD degree in Computing and Mathematics and B.Sc. degree in Computer Science from the University of Bradford, UK, in 2010 and 2006, respectively. His recent research focuses on Future Network Architecture and Protocols, Wireless Networks and Mobile Computing, Cloud Computing, and Performance Modelling and Analysis. He has published over 30 research papers on these areas in prestigious international journals, including IEEE Transactions on Parallel and Distributed Systems, IEEE Transactions on Communications, IEEE Transactions on Wireless Communications, IEEE Transactions on Vehicular Technology and ACM Transactions on Embedded Computing Systems, and reputable international conferences. He was the recipient of the Best Paper Awards from IEEE CSE 2009 and ICAC 2008 conferences. He has served as the Guest Editor for many international journals including Elsevier Computer Networks and ACM/Springer Mobile Networks and Applications (MONET). He has been the Chair or Vice-Chair of 20 international conferences/workshops and has served as the PC member of more than 60 professional conferences/workshops. He was awarded the Outstanding Leadership Awards from IEEE ISPA 2013 and TrustCom 2012, and the Outstanding Service Awards from IEEE HPCC 2012, CIT 2010, ScalCom 2010. His research interest areas are Future Internet Architecture: software defined networking, network functions virtualisation, clean-slate post-IP network technologies (e.g., information centric networking), cloud computing technologies, mobility; Wireless Networks and Mobile Computing; Cloud Computing; Performance Modelling and Analysis.

Dr. Banshidhar Majhi is a Professor in Computer Science & Engineering Department at National Institute of Technology Rourkela, Rourkela, India. Dr. Majhi has 24 years of teaching and 3 years of industry experience. He has supervised 8 PhD students, 40 M.Tech, 70 B.Tech students and several others are pursuing their courses under his guidance. He has over 50 publications in journals and 70 publications in conference proceedings of national and international repute. He was awarded with Gold Medal for Best Engineering Paper from IETE, 2001 and from Orissa Engineering Congress, 2000. He visited Department of Computer Engineering, King Khalid University, Abha, Kingdom of Saudi Arabia as a Professor from October 2010 to February 2011 and Department of Computer Engineering and Information Technology, Al-Hussein Bin Talal University, Ma’an, Jordan as Assistant Professor from October 2004 to June 2005. His research interests are Image Processing, Data Compression, Security Protocols, Parallel Computing, Soft Computing, and Biometrics.