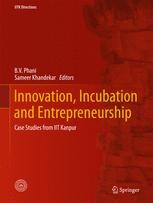 This book focuses on promoting entrepreneurial ecosystems within universities and educational institutes. It especially emphasizes the thriving systems and practices existing within the Indian Institute of Technology Kanpur (IITK). It discusses cases and successes of the SIDBI Incubation and Innovation Centre in the Institute. This edited volume highlights the vision of IITK and describes a few of the major achievements of the past few years. It especially showcases the requirements and challenges of creating, sustaining, and boosting such entrepreneurial ecosystems and incubation centres. The contents of this book will be useful to researchers, administrators, and corporate collaborators working in the area of monetizing technology coming from educational institutions by converting it to successful products and business ideas.

Dr. Phani is currently a Professor of Finance, Innovation & Entrepreneurship at IIT Kanpur, he was earlier the Associate Dean Innovation and Incubation handled the additional responsibility of  Coordinator, SIDBI Innovation Incubation Center (SIIC) for the last one decade. Currently he is the Dean Resources and Alumni with additional responsibility of Faculty in Charge, Motwani Incubator & Accelerator (MIA) and Coordinator, Syndicate Bank Entrepreneurship Research and Training Center. He is a mechanical engineer with a PhD in finance from IIM Calcutta. Prior to pursuing a PhD at IIM Calcutta he held various managerial positions and his last position was as CEO of BCIT Limited a computer education and services startup company. He is also the recipient of various teaching and research awards from national and international foundations to his credit and also shares his experience at various universities across the world as an invited guest. On the entrepreneurship front the incubation center at IIT Kanpur has undergone several developmental  changes  under  his  able  stewardship.  Currently  the  centre  has  32 startup firms in diverse areas and has graduated around 30 firms successfully with a few exits. Dr Phani was also the NEN faculty resource for their ‘Educating the Educators (ETE)’ initiative across the country and is an advisory board member of NEN. Dr. Phani is also instrumental in taking IIT Kanpur’s IP initiative efforts to the next level by facilitating the patenting of a few hundred patents in the last few years from IP generated as part of the institute’s research effort. His team has been able to successfully commercialized around 25 percent of the patents generating a substantial revenue stream and also jump starting IITK’s industrial collaboration initiative. He has helped widen the platform for start-up prospective entrepreneurs and intrapreneurs to convert their innovative ideas into commercially viable products. He is also a mentor director in around 25 startup firms. He is a member of the mentor board of Ivy Cap Ventures and many other such venture, angel and professional bodies.

Prof. Sameer Khandekar is affiliated to the Department of Mechanical Engineering, Indian Institute of Technology Kanpur, India, since September 2004. He completed Masters Degree from IIT Kanpur, India (1998-2000) in fluid-thermal engineering and subsequently earned doctoral degree from University of Stuttgart, Germany (2000-2004). Earlier, after his undergraduate studies in Mechanical Engineering from Government Engineering College, Jabalpur (MP), he worked as a marine power plant engineer on board sea-going merchant vessels for four years (1994-1998). He is a recipient of P. K. Kelkar Research Fellowship (IIT Kanpur; 2008-2011)), DAAD Fellowship (2011), Prof. K. N. Seetharamu Award (Indian Society of Heat and Mass Transfer, 2010), George Grover Medal (International Heat Pipe Committee, 2007) and Young Scientist Award (Department of Atomic Energy, India, 2005). He is a member of the International Heat Pipe Committee and editorial board member of two international journals on science and technology of heat pipes. He has served as academic senate member of one central and one state funded autonomous engineering institutes. He has also served as an invited faculty member at four international universities at Germany, France, Brazil and Thailand. He has over forty-five research publications in international journals, over sixty publications/presentations in international conferences, including 15 Keynote lectures/Invited Talks and two books to his credit. He is presently serving as the Associate Dean (Innovation and Incubation) of IIT Kanpur (2015 - ongoing). His current research interests are in experimental microscale phase-change thermo-fluidic systems, boiling and condensation, heat pipes and energy systems.