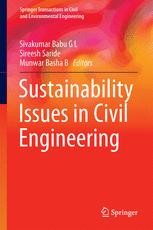 He has guided a number of students for research degrees (Ph.D and M. Sc (Engg.) and wrote a book on soil reinforcement and geosynthetics, edited six books and proceedings and has over 200 publications to his credit in journals and conferences of international repute. He has received several awards for his work such as best PhD thesis in geotechnical Engineering in India from Indian Geotechnical Society, Humboldt fellowship from Germany, DST Boyscast Fellowship, Young Engineer from Central Board of Irrigation and Power, New Delhi and a few awards for best papers from ASCE and Indian Geotechnical Society.<

Dr. Sireesh Saride is currently Associate Professor in the Department of Civil Engineering, Indian Institute of Technology Hyderabad. His expertise and research interests are in the area of pavement geotechnics, geosynthetics and ground improvement. He earned his B.Tech (2000) from Jawaharlal Nehru Technological University, India and his masters integrated with PhD from Indian Institute of Science, Bangalore, India in 2006. He pursued his post-doctoral research at the University of Texas at Arlington. Sireesh’s current research focuses on dynamic behavior of geocell reinforced base and subbase layers and improvement of rural roads using secondary/recycled materials. His research sponsorship comes from the Department of Science and Technology, Ministry of Road Transportation and Highways, Naively Lignite Corporation Ltd., and other private sector enterprises. Sireesh has published more than 100 referred journal and conference articles and technical reports. He is a currently serving as Associate Editor for the Journal of Ground Improvement (ICE) and Journal of Materials in Civil Engineering, ASCE. He is also a Guest Editor for a special Issue on ‘Transporation Geotechnics’ of Indian Geotechnical Journal (2015). He is a member of ASCE, ICE and life member of IGS and IRC. He served as a Secretary for ASCE India Section (2012-14). Dr. Sireesh received best paper awards from Indian Geotechnical Society (2004, 2014) and ASCE GeoShanghai Conference (2010). He received young scientist award from DST, Government of India (2012).

Dr. B. Munwar Basha obtained his B.Tech (in Civil Engineering) from JNTU college of Engineering, Anantapur, India in June 2001, M.Tech from IIT Kanpur in 2004 and Ph.D. from IISc Bangalore, India in Aug 2009. He was a post doctoral researcher at IISc Bangalore, India until 2010. He worked in IIT Delhi as Assistant Professor in Civil Engineering Department from 2010 to 2013. Presently, he is Assistant Professor in Civil Engineering Department at Indian Institute of Technology, Hyderabad, India. He has guided 5 M.Tech and 4 B.Tech projects. He has successfully completed several sponsored research projects. He has more than 54 publications in journals and conferences. He has consulted on more than 10 projects.