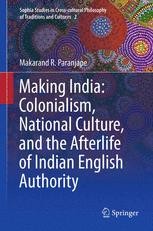 Compared to how it looked 150 years ago at the eve of the colonial conquest, today’s India is almost completely unrecognizable. A sovereign nation, with a teeming, industrious population, it is an economic powerhouse and the world’s largest democracy. It can boast of robust legal institutions and a dizzying plurality of cultures, in addition to a lively and unrestricted print and electronic media. The question is how did it get to where it is now?

Covering the period from 1800 to 1950, this study of about a dozen makers of modern India is a valuable addition to India’s cultural and intellectual history. More specifically, it shows how through the very act of writing, often in English, these thought leaders reconfigured Indian society. The very act of writing itself became endowed with almost a charismatic authority, which continued to influence generations that came after the exit of the authors from the national stage.

By examining the lives and works of key players in the making of contemporary India, this study assesses their relationships with British colonialism and Indian traditions. Moreover, it analyzes how their use of the English language helped shape Indian modernity, thus giving rise to a uniquely Indian version of liberalism. The period was the fiery crucible from which an almost impossibly diverse and pluralistic new nation emerged through debate, dialogue, conflict, confrontation, and reconciliation.

The author shows how the struggle for India was not only with British colonialism and imperialism, but also with itself and its past. He traces the religious and social reforms that laid the groundwork for the modern sub-continental state, proposed and advocated in English by the native voices that influenced the formation India’s society. Merging culture, politics, language, and literature, this is a path breaking volume that adds much to our understanding of a nation that looks set to achieve much in the coming century.

Makarand R. Paranjape is Professor of English in the Centre for English Studies, Jawaharlal Nehru University, New Delhi. He was educated at St. Stephen's College, University of Delhi (B.A. Hons.) and at the University of Illinois at Urbana-Champaign, USA (Masters and Ph.D.). He is the author/editor of over thirty-five books which include works of criticism, poetry, and fiction, and has also published over 125 academic papers in books or journals published from India and abroad. His latest work includes the two monographs Another Canon: Indian Texts and Traditions in English (2009) andAltered Destinations: Self, Society, and Nation in India (2010).