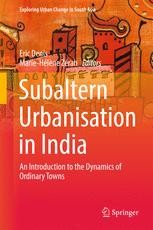 An Introduction to the Dynamics of Ordinary Towns

​This volume decentres the view of urbanisation in India from large agglomerations towards smaller urban settlements. It presents the outcomes of original research conducted over three years on subaltern processes of urbanization. The volume is organised in four sections. A first one deals with urbanisation dynamics and systems of cities with chapters on the new census towns, demographic and economic trajectories of cities and employment transformation. The interrelations of land transformation, social and cultural changes form the topic of the “land, society, belonging” section based on ethnographic work in various parts of India (Karnataka, Himachal Pradesh, Arunachal Pradesh and Tamil Nadu). A third section focuses on public policies, governance and urban services with a set of macro-analysis based papers and specific case studies. Understanding the nature of production and innovation in non-metropolitan contexts closes this volume. Finally, though focused on India, this research raises larger questions with regard to the study of urbanisation and development worldwide.

Marie-Hélène Zérah is Research Fellow, CESSMA, Institute of Research for Development, Paris and she is a Senior Researcher with the Institute of Research for Development (Paris) seconded to the Centre of Policy Research (New Delhi). From 2009 to 2013, she headed the urban dynamics research team at the Centre de Sciences Humaines, New Delhi where she led the SUBURBIN research project with Eric Denis. Previous to this interest on small towns she has worked in the area of urban infrastructure, urban governance and urban democracy in Indian cities. She has published extensively on these topics in international journals and edited volumes and in her book on Water: Unreliable Supply in Delhi (2000, Manohar Publishers and 1999, Economica for its French version). She has co-edited a volume published by the UNESCO on the Right to the City in India (2011, with Dupont and Tawa Lama-Rewal). She is part of Geoforum’s editorial board and is Series Editor of the Springer collection: Exploring Urban Change in South Asia. She has also been involved in projects and consultancies for a number of organisations, including the European Union, the Water and Sanitation Programme and the Suez group.

Eric Denis, Senior Research Fellow from French National Centre for Scientific Research (CNRS), he is currently based at the Géographie-cités Lab., Université Paris 1 – Panthéon-Sorbonne. He holds a Ph.D. in urban and economic geography from the University of Caen in France (1993) and a Habilitation from the Sorbonne (2014). After ten years posted in Cairo (Egypt), he has been, from 2009 to 2013 in charge of the social sciences department at the Institut Français de Pondichéry (India) where he led a research project on India's small cities and development beyond the metropolis (SUBURBIN, Subaltern Urbanisation in India www.suburbin.hypotheses.org) with Marie-Hélène Zérah. He is the author of about fifty papers and books on social geography and urban studies and the editor of several volumes, including Popular Housing and Urban Land Tenure in the Middle East (2012, AUC Press, with Ababsa & Dupret), Villes et urbanisation des provinces égyptiennes (2007) and the Atlas of Cairo (2000). He has beeninvolved in several applied research programmes on urban questions, land access and security of tenure. He contributed to the e-Geopolis programme measuring world urbanisation, supported by the Agence Française de Développement and the World Bank.